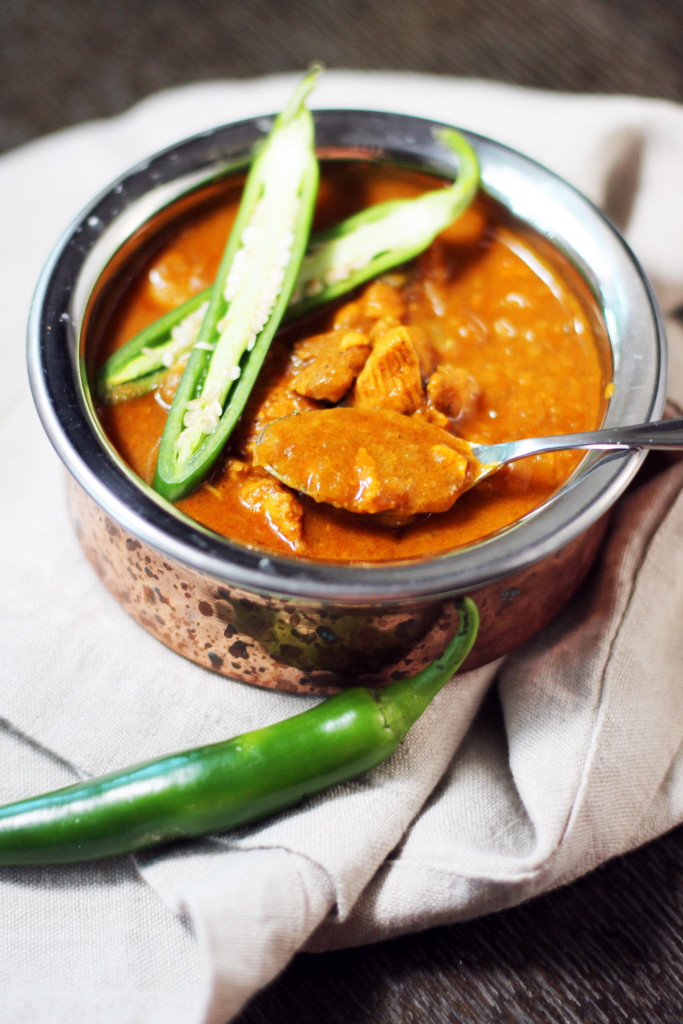 Okay guys, I know.. I talk a lot about my Indian food obsession, but have only posted like 3 recipes on the blog (here, here, and here).  But never fear- today I am returning to the source of my culinary obsession.

Unlike many food bloggers I was never much of a chef growing up.  I thought it seemed annoying and restaurants always seemed to make food better.  The extent of my “cooking” experience was sitting in the kitchen and gossiping with my mom while she made cookies.  But then, being a creative person and also a poor college student, I decided cooking might be a useful item to add to my life-skills repertoire.

And then I discovered Indian food, and life was never quite the same. 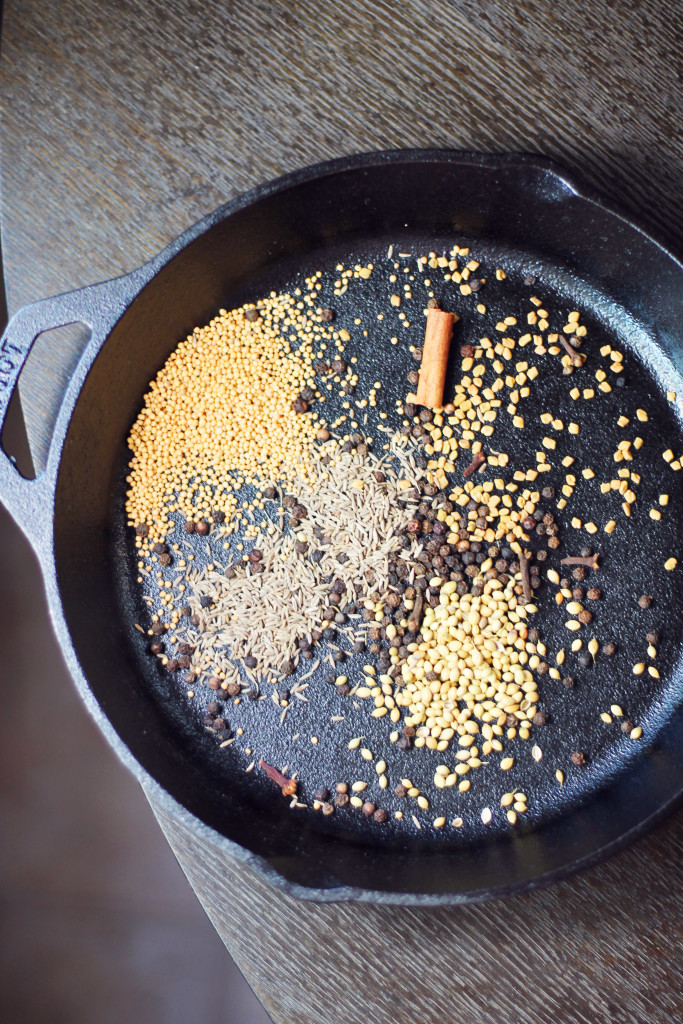 I’m not going to lie- it took me a while to “figure out” Indian food.  A) The method is totally different than most American/European food.  B) It takes a decent commitment and some amount of start-up capital to acquire all the right spices.  BUT if you are at all thinking this (Indian cooking) might be something you want to do in your life on repeat- please please please skip the regular grocery store spice aisle and get yourself over to the nearest Indian store.  I promise you will get way better spices, for cheaper, and be able to actually acquire the right stuff.

Don’t waste your money at Penzeys or similar… it’s just not worth it.  And you just won’t be able to get methi seeds at Ralphs.  Sorry, guys. 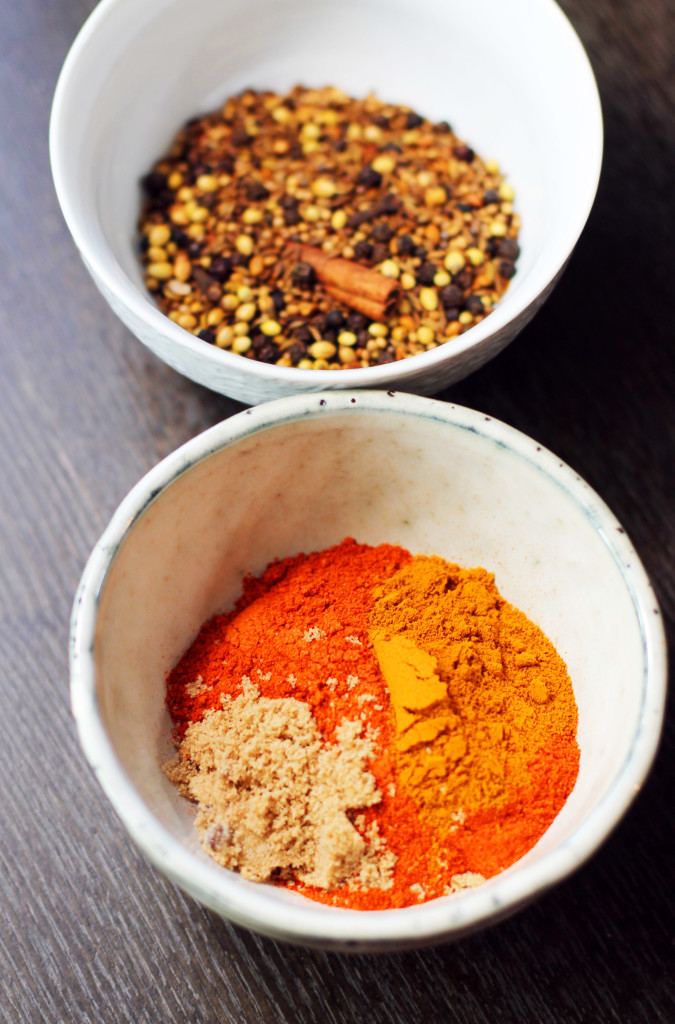 One thing I’ve learned when cooking Indian is that it’s really hard to over-do the spices.  But very easy to under-do the spices.  So if push comes to shove, get a little heavy-handed.  The one exception to this being heat- you want to be careful not to kill your dish by adding buckets of cayenne to the base of your curry because once you add it, you can never go back.  BUT don’t be afraid of kashmiri chili powder.  This adds a ton of color and flavor but not a lot of heat.  And yes, please buy Kashmiri chili powder, this is the best variety in my opinion. 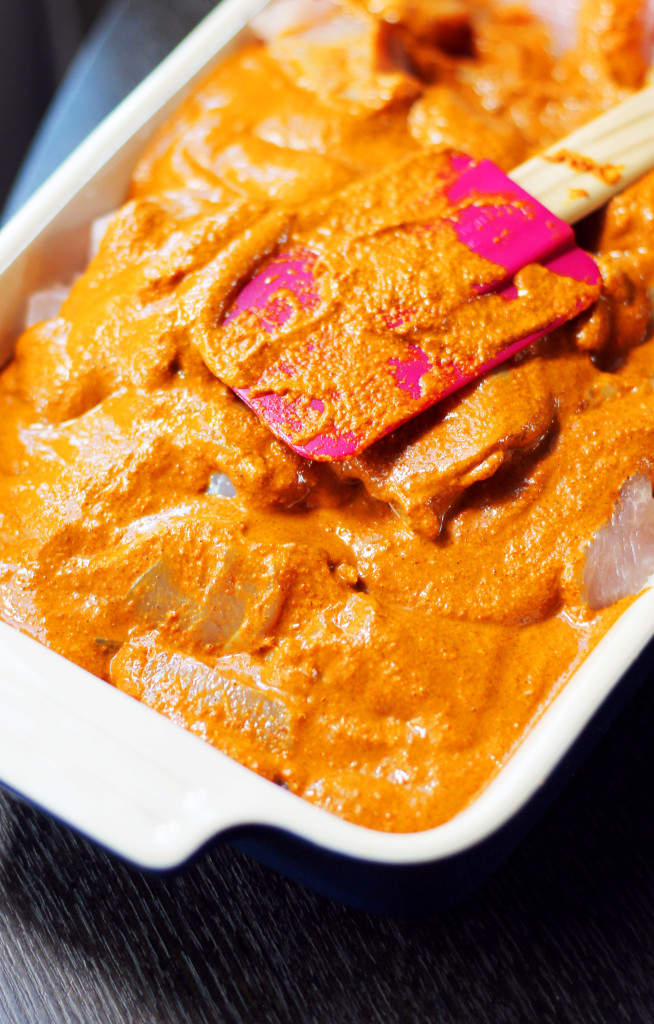 So let’s talk method- the base of most curries is some amount of onion, ginger, garlic, and maybe some tomato.  This combo of ingredients is typically cooked down to a paste-like consistency and then the masala (spices) are added.  Then typically one adds the meat that one is using, some amount of water, and simmer until the meat is tender and the flavors are well-combined.  Indian cuisine is like the king of slow-cooking. 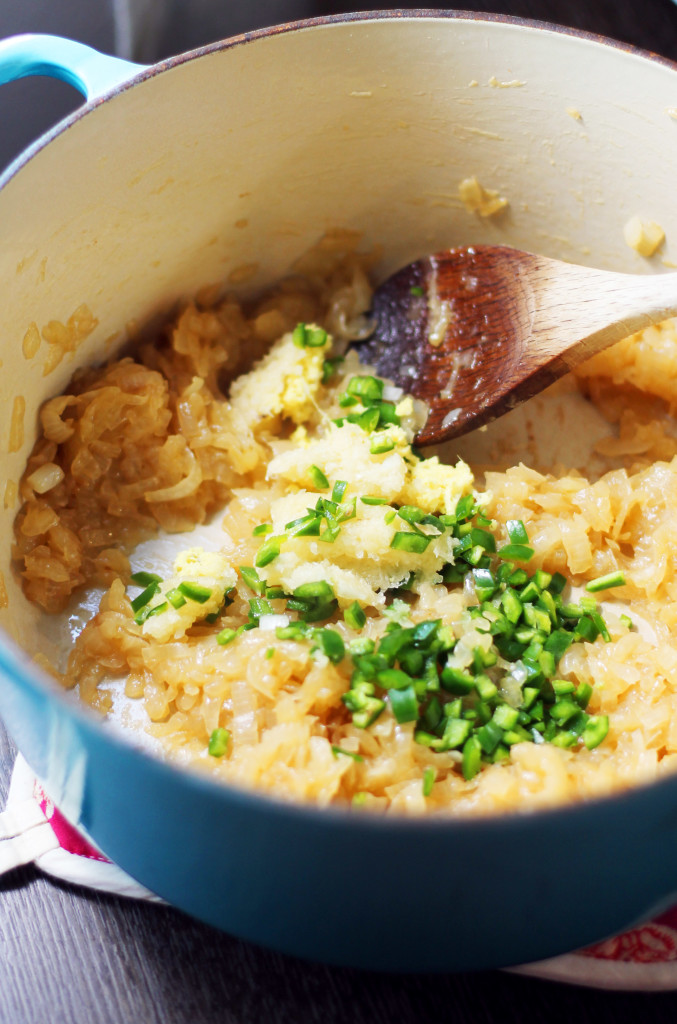 This particular dish is Chicken Vindaloo.  Vindaloo is actually fairly unique because it’s not exactly Indian in origin… at least the name is not.  It’s actually a fusion dish that has roots from the Portuguese.  The “Vin” in the name Vindaloo stands for wine, of which there is none, but typically there is some type of wine-vinegar- hence the name.  Also Aloo in the name does not stand for “potato” as I assumed (potato in Hindi is Aloo).. it’s actually a reference to a Portuguese spice-blend.  The Portuguese settled Goa, and thus an Indian-fusion classic was born.. using the spices of the east with the methods of the west. 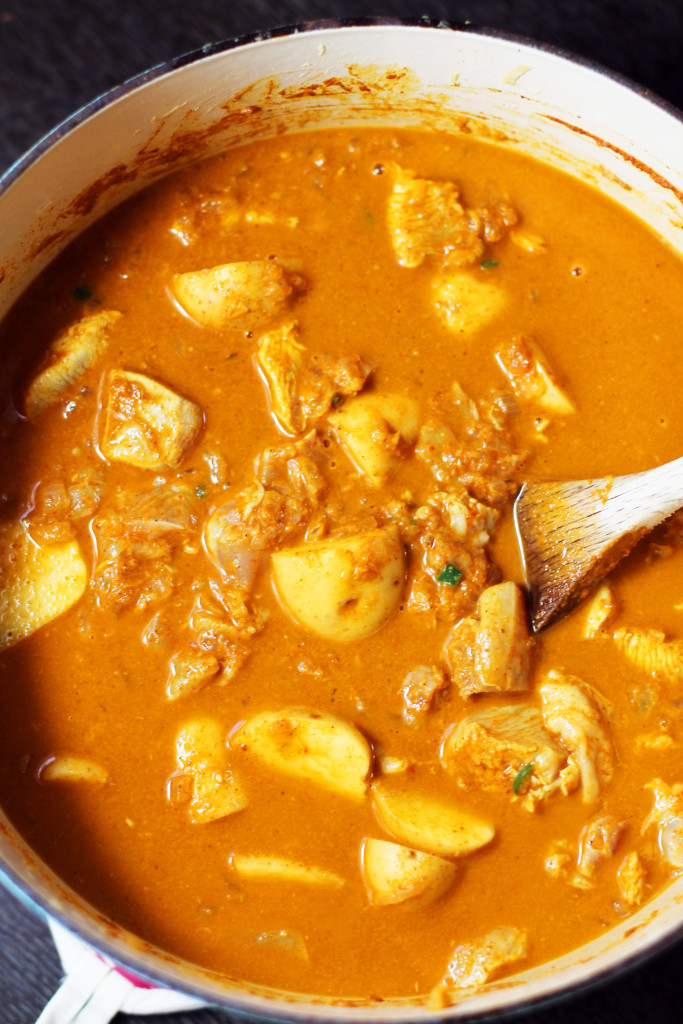 Vindaloo has a reputation for being an unbearably spicy dish.  Goa is known for having incredibly spicy food.  People who love capsaicin can’t stay away from vindaloo.  I personally don’t like to abuse my mouth in this way so my recipe is on the medium-heat side.  If you want it spicier, throw in more chile peppers. If you prefer a mild dish, cut back a little on the black peppercorns in the spice blend, and you can omit the green chiles.

But o.m.g. the flavor of this curry is awesome. 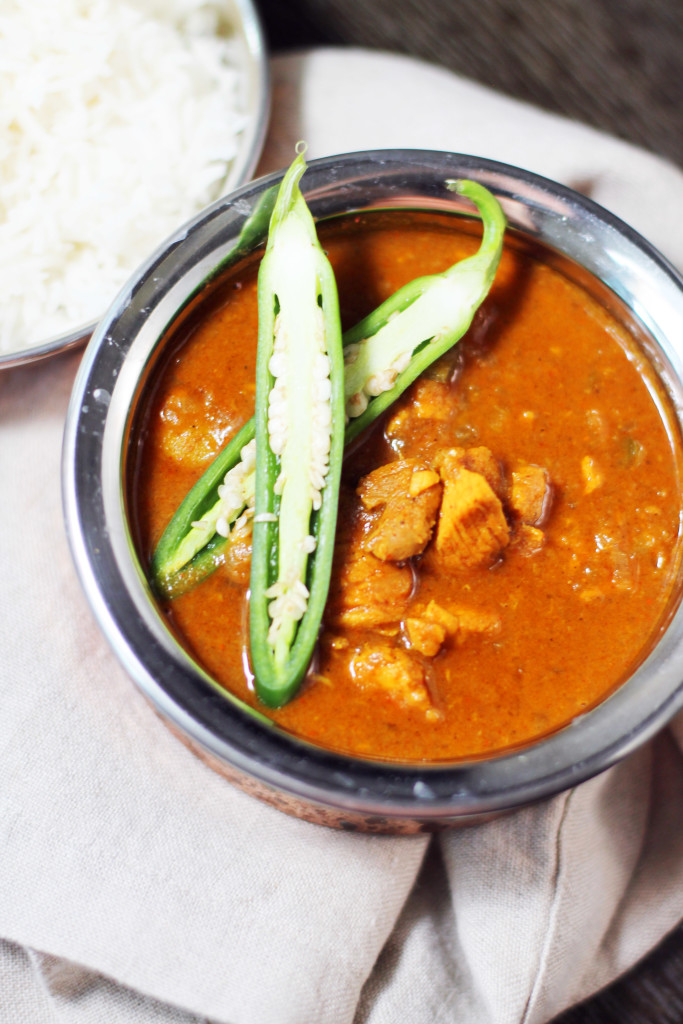 You will love this one, I promise. 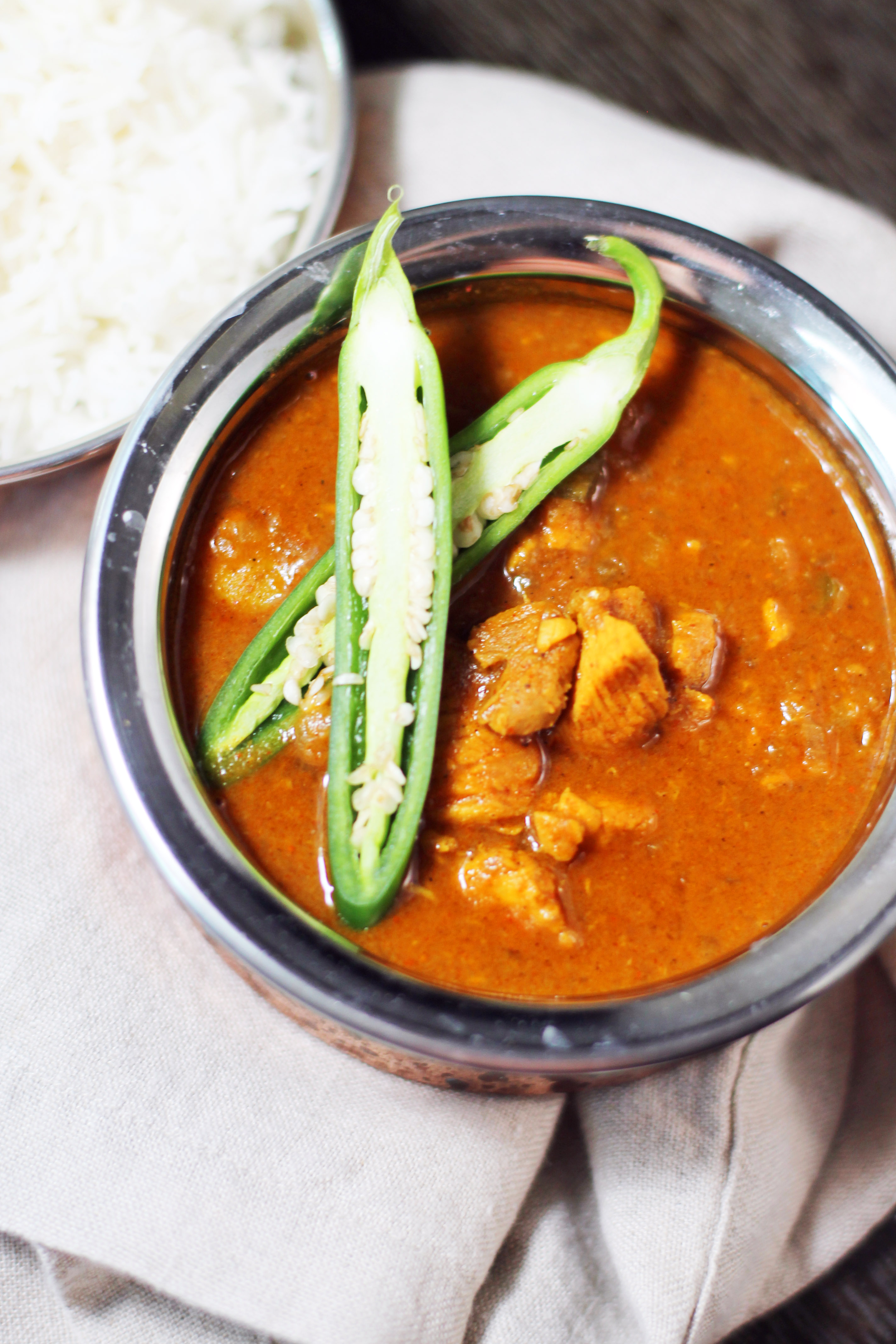 Your photographs and description are very convincing. We LOVE Indian food and I’m going to give this one a go! Thank you for the great recipe.

Thanks Seana! I hope your family enjoys it 🙂

Oh my goodness, you were like reading my mind. I think my boys request vindaloo at least once a week. One likes it mild and one likes it spicy so I just do one pot and take his helping about before I put the fire into the chili. I think this curry has a great spice mixture and cooking them over the fire to release its oils is the great way to start and it makes your house smell wonderful. Sharing and pinning!

Thanks Bobbi!! That’s awesome that your kids love Indian food- do you have a lot of access in Hong Kong or do you make it at home??

By the way- I heard that in India there is a Chinese-Indian fusion called Manchurian cuisine. Do you get this as well in Hong Kong??? I’ve always wanted to try it..

Lovely post. And I love that you don’t use curry powder! Terrible stuff. I mean, it’s probably not terrible, especially Penzey’s, but all your food would taste the same!!!

Haha yeah exactly.. .and to be fair the regular curry powder at the grocery store is pretty terrible 😉

Indian spices are definitely worth the investment, IMO. I LOVE THEM. I have never made vindaloo at home, but it is on my bucket list!

Yes! Making the masala at home just takes it over the top. Vindaloo is definitely worth it- hope you give a shot some day!

This is my absolute FAVORITE Indian dish- and your photos are absolutely mouthwatering!! Delicious!

Thanks for the compliments, Josette! We love vindaloo over here too… one of the best!