Chicken Soup with Lemon and Orzo 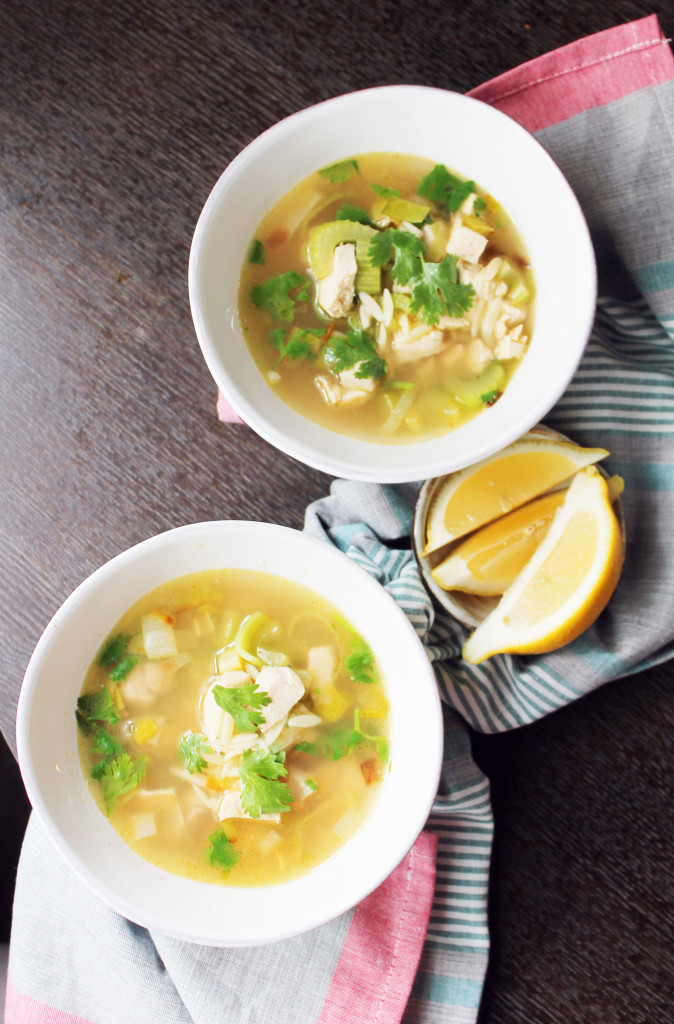 Chicken soup with lemon and orzo: think of it as a fancier upgrade to the classic chicken noodle soup.

I.e. A fancier upgrade in which orzo takes the place of the classic egg noodle, and there are leeks instead of onion.  And a handful of cilantro and a quick squeeze of lemon take this recipe over the top.

Now, homemade chicken noodle soup has to be one of the easiest recipes on the planet and I have been making it for years.  The method is very simple- saute a few vegetables, boil some noodles, bake some chicken, then mix it all together.  And Voila!  Quick, healthy, and comforting dinner. 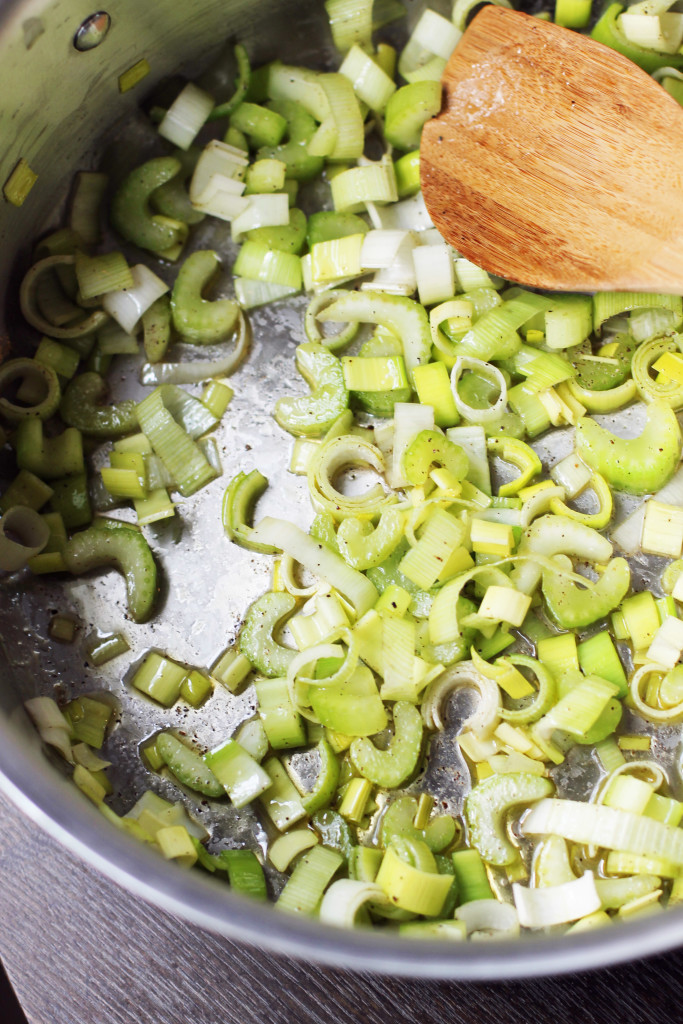 This recipe is really no different method wise.  However the flavors of the leeks, lemon, and cilantro make this a more mature chicken noodle soup (and make Sarah sound extremely pretentious). If you’re not a cilantro fan, I think you could get away substituting with a variety of other herbs- the recipe is slightly adapted from Bon Appetit and calls for dill- which I haven’t tried, but seems like it would likely be a good idea (and would certainly complement the lemon).  I find dill a little bit overpowering for my taste, so I think thyme, parsley, or chives would be acceptable substitutions.

But I guarantee that the cilantro is good.  Trust me. 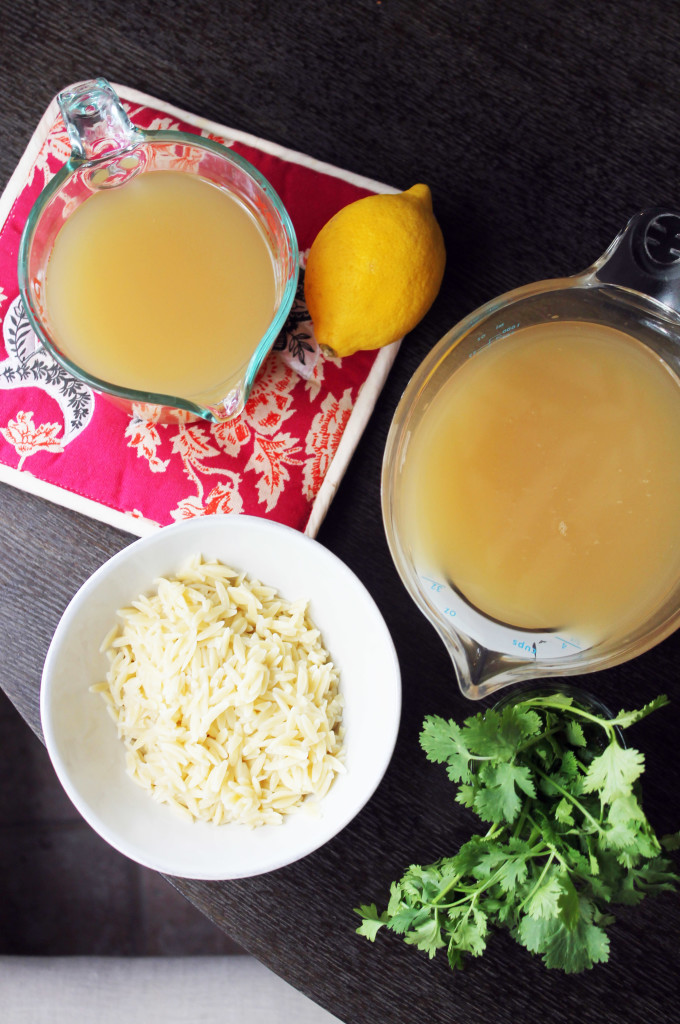 While I think chicken noodle soup is pretty fool-proof, the one recommendation that I do have is to boil the orzo separately before adding it to the broth.  I have had the experience of adding pasta to cooking liquid (i.e. the chicken broth), and the pasta soaks up so much liquid it’s barely considered soup at that point; and don’t get me started on overnight broth absoprtion… You can just go ahead and say goodbye to soupy leftovers.  Which is a travesty considering that when one makes soup one typically wants leftovers.

SO! My point is that pre-boiling ensures enough liquid will be absorbed by the pasta that it won’t end up drinking up all the soup and you can still plan to eat soup for leftovers without worry.

The recipe also calls for pre-baking the chicken, which I also recommend, and then shredding or chopping and adding to the soup. 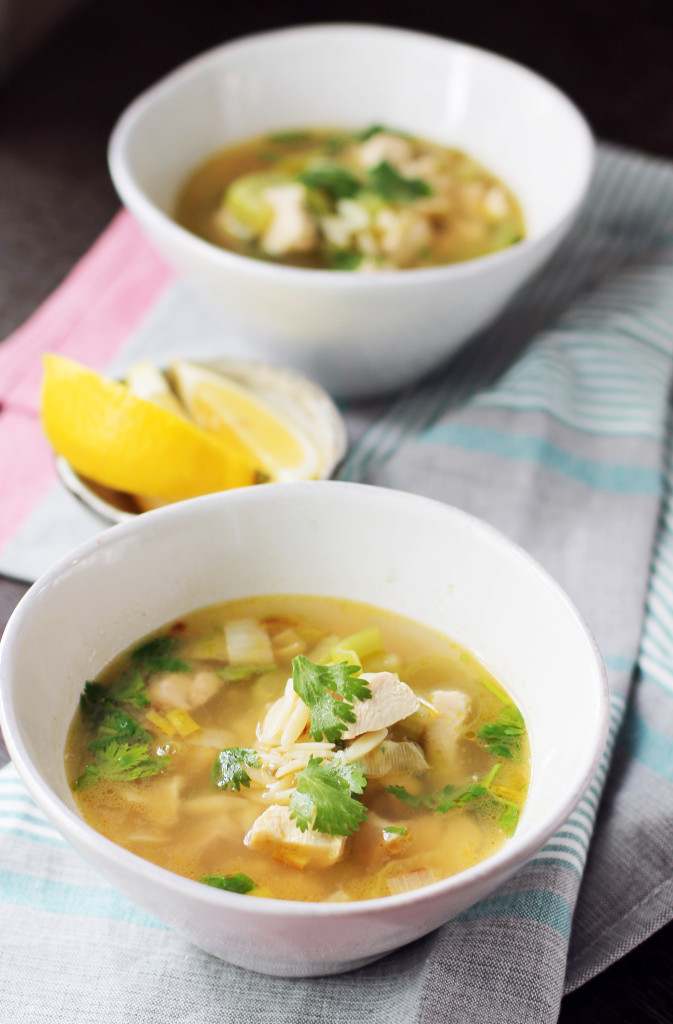 Then once you have all your separated ingredients prepared and prepped, you toss them all together in a large pot, add some stock, and bring it to a simmer.  Add the cilantro and lemon at the very end to preserve their freshness and flavor. 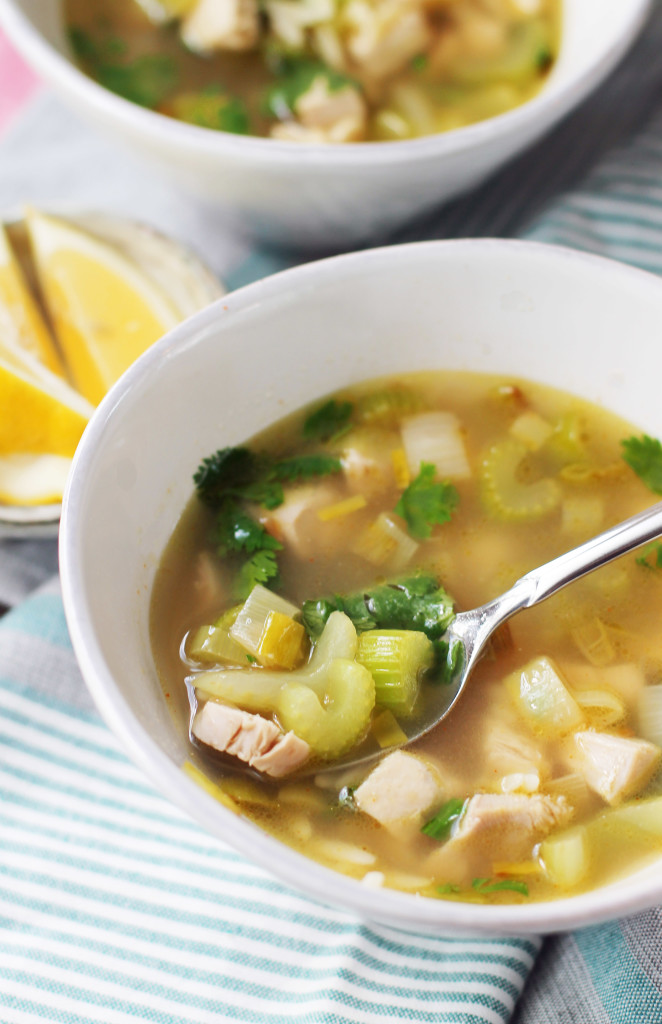 The soup is not overpoweringly lemony, so I’d recommend serving it with a wedge of lemon just in case you want your’s a little brighter.  I’m a lemon fan so I added more. 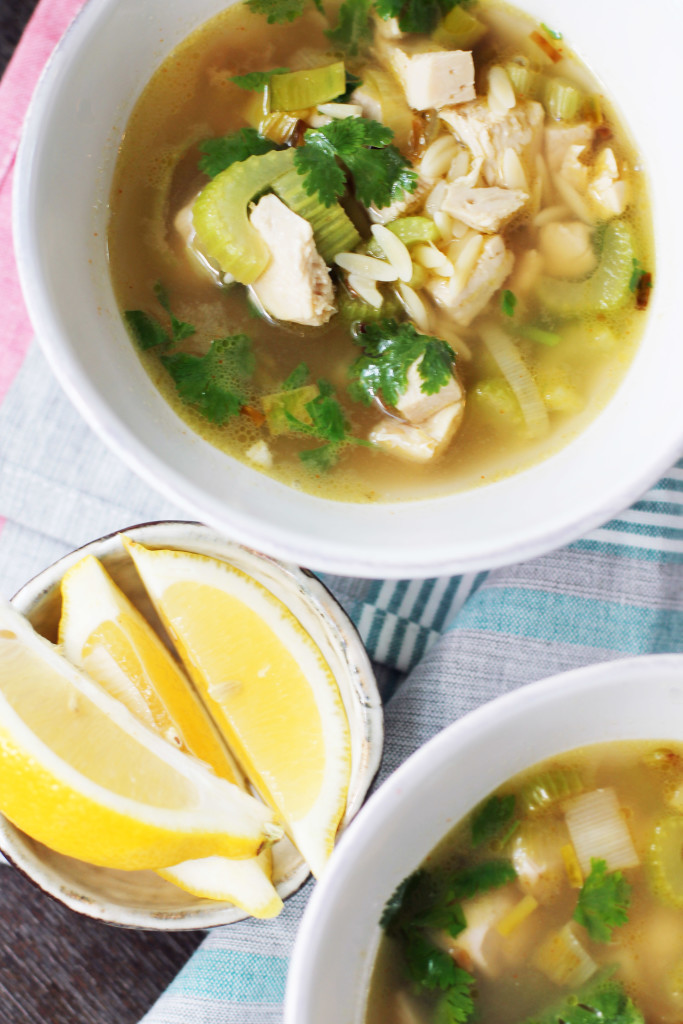 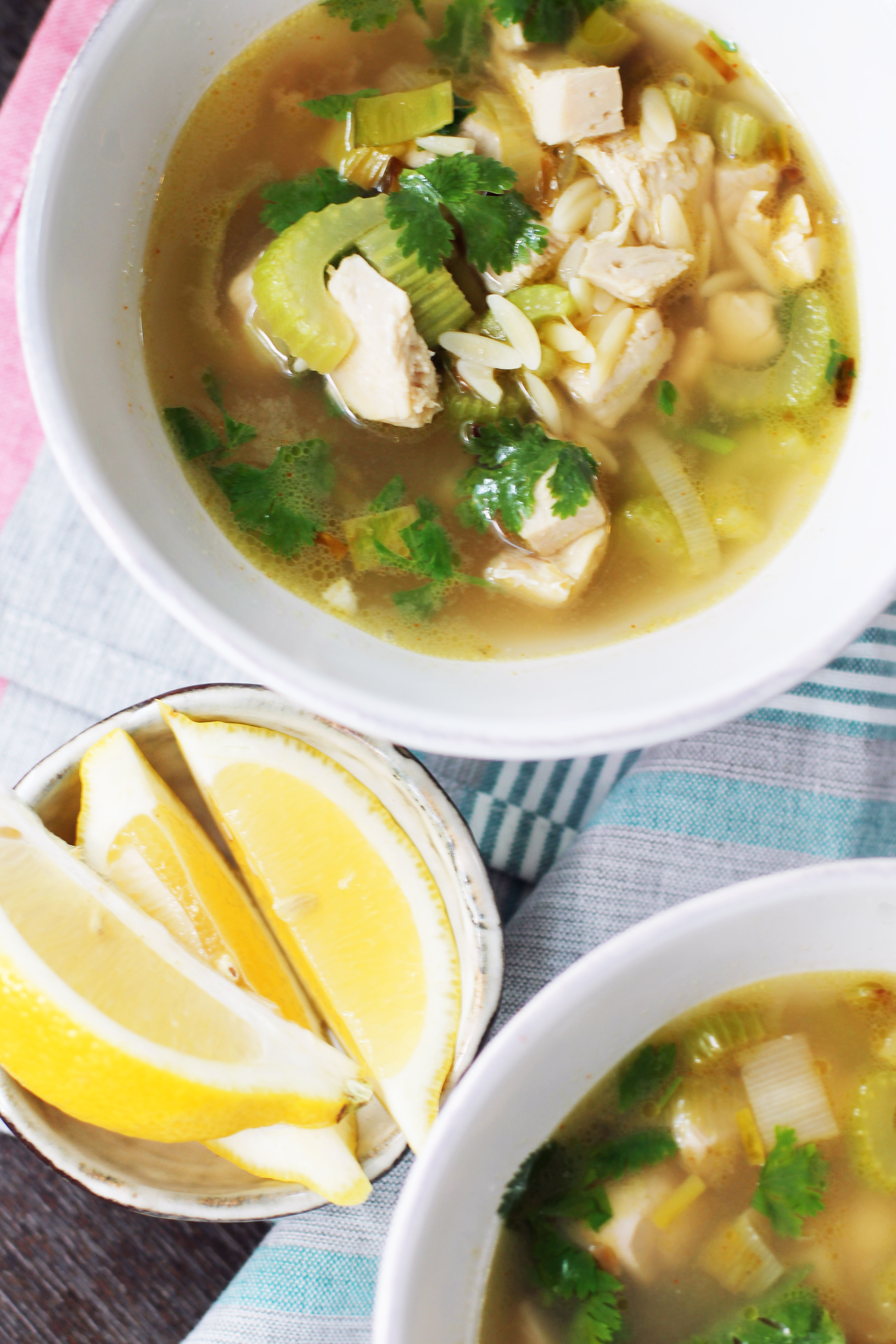 Chicken Soup with Lemon and Orzo

Lovely chicken soup! Leeks instead of onions is such a great idea, and I like how you freshened it up with lemon and cilantro (though I would probably adore the dill version too).

Thank you so much Darya! I’m sure dill would be fabulous- It’s just not one of my favorite herbs so I switched it up a bit here 🙂

I love chicken and lemon soup and I have always had with rice and as a fun change need to try it with orzo next time. Great fall soup to warm you up. Just pinned!

Thanks so much Bobbi! Rice is a great idea- will have to try that strategy next 😉

Now that the weather has started to cool down I suddenly find myself with soup cravings. Your soup looks absolutely divine. I love how you brightened traditional chicken soup up with the addition of the lemon and subbed the orzo for the noodles.

I couldn’t agree more that this is the sophisticated adult’s version of a childhood favorite.

Oh, this looks just so perfect for me.. I can do with a bowl right now.. I hope a day comes, when internet delivers such perfect recipes at the click of a button