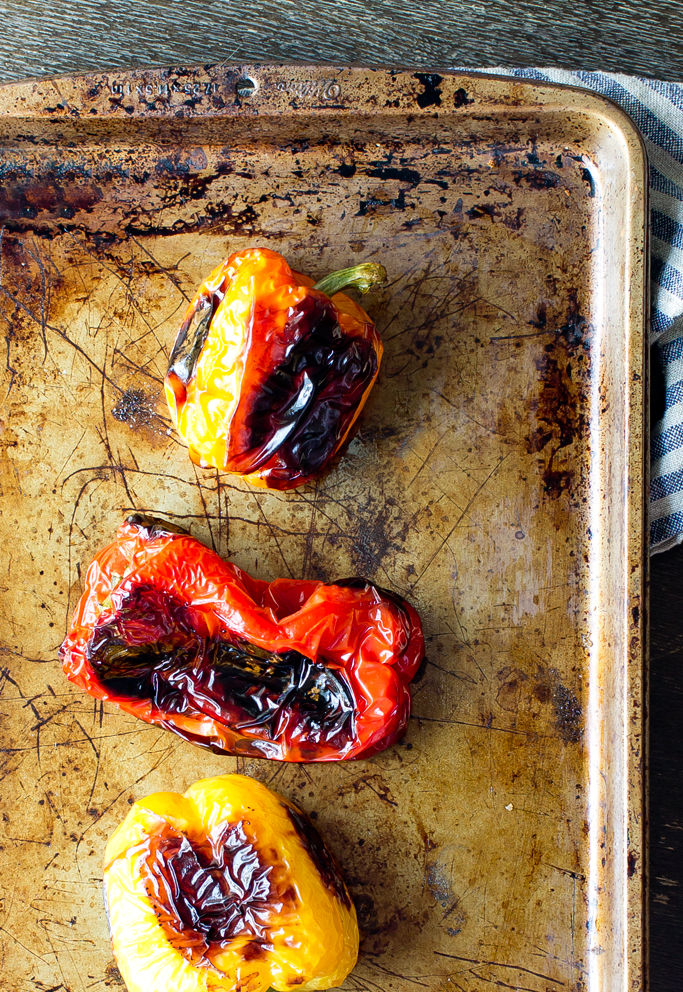 That’s what I was thinking, at least, when I decided to make this Summer Panzanella.

Panzanella is a hearty salad that heralds from Tuscany, Italy, and typically is made up of a combination of stale bread plus tomatoes, other vegetables, and a light vinaigrette.  The idea is that the stale bread soaks up the juices of the salad and results in a fabulous melding of summer flavors.  The bread is the key part here; it wouldn’t be panzanella without. 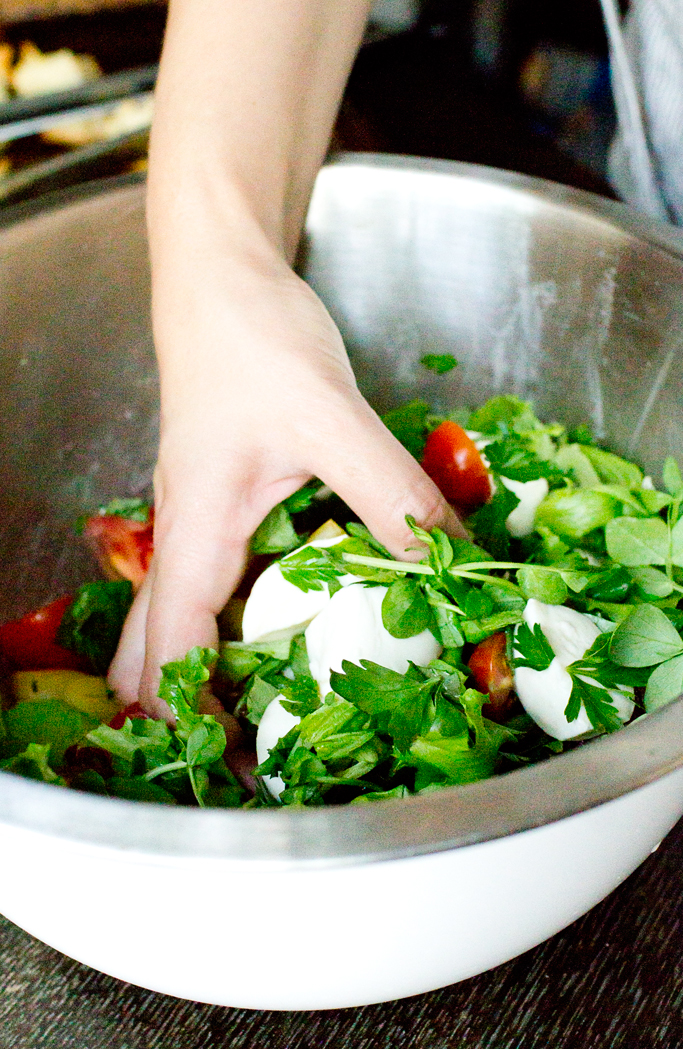 In my recipe I didn’t have any stale bread on hand, so I made my own toasted bread by tossing chunks of my favorite french bread in olive oil and baking it in the oven until lightly toasted on the outside.  I still prefer my bread to have some soft texture on the inside, so I didn’t bake it long enough to turn it into a crouton.

I used beautiful heirloom tomatoes that I found at the store this week, and I roasted my own peppers from scratch (but jarred ones will certainly do in a pinch).   I also decided to add some fresh mozzarella, because, well, I had it on my mind after this awesome appetizer. 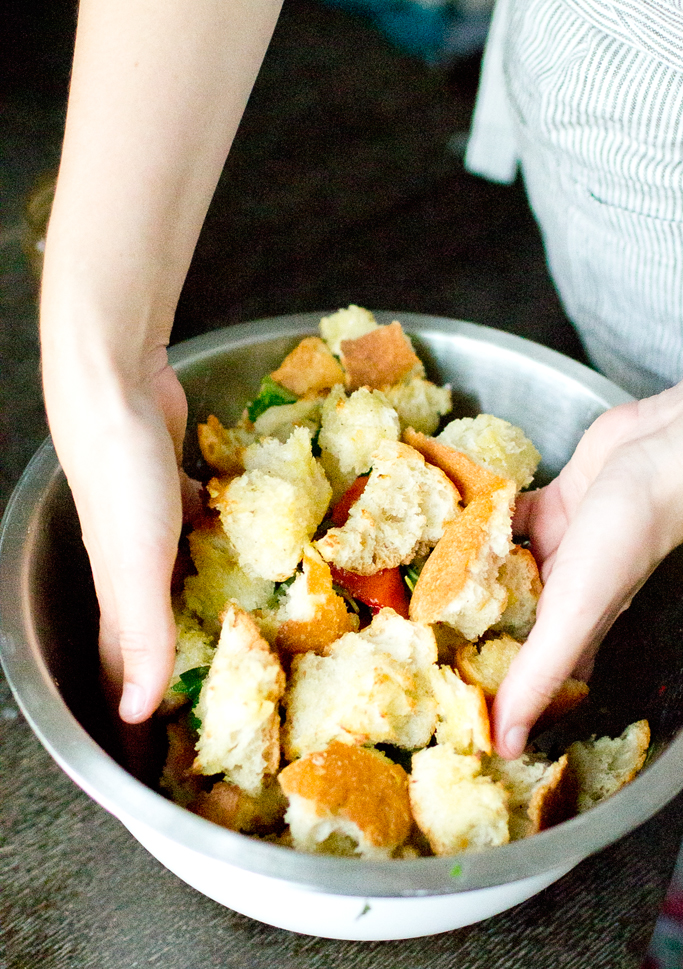 I tossed everything together with some fresh herbs, a few greens, and some home-made balsamic vinaigrette.

It was truly summer on a plate. 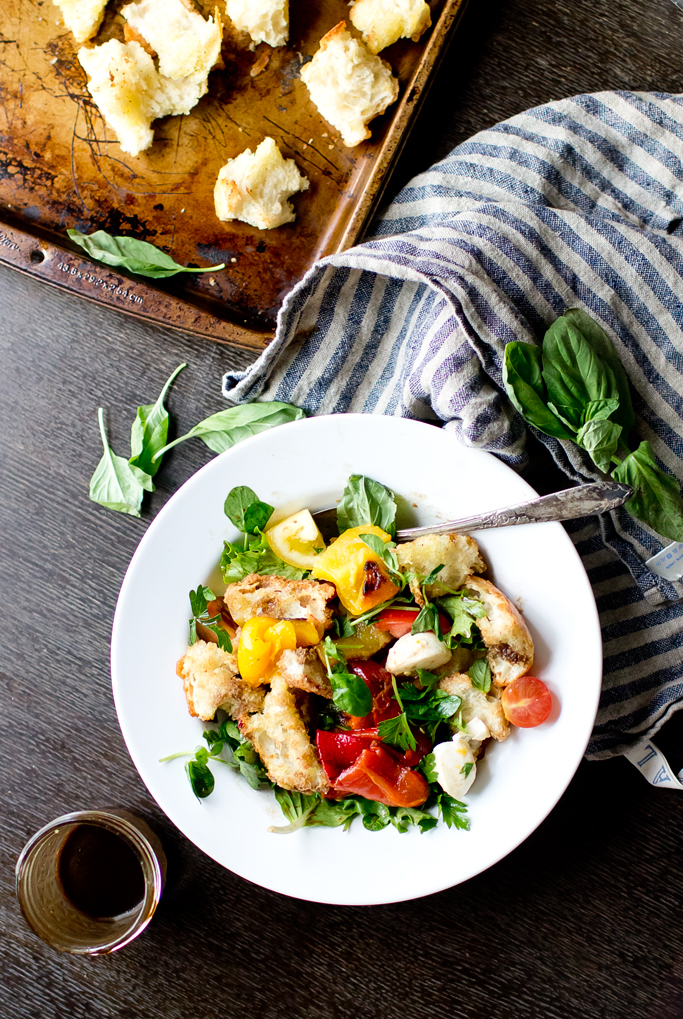 I hope you enjoy this one as much as I did (this was another one that I took to the office and is now co-worker approved).  I also apologize for the graininess factor in a few of these photos… I was taking these pictures in relatively low light so I flipped the ISO too high and ended up with grainy photos.  If anyone was confused by what the heck ISO does, now you know…  it lets in more light at higher numbers, but affects the general image quality.  I usually shoot at low ISO, but for “action shots” in low light I needed to flip the ISO to a higher setting to get the shot I needed. 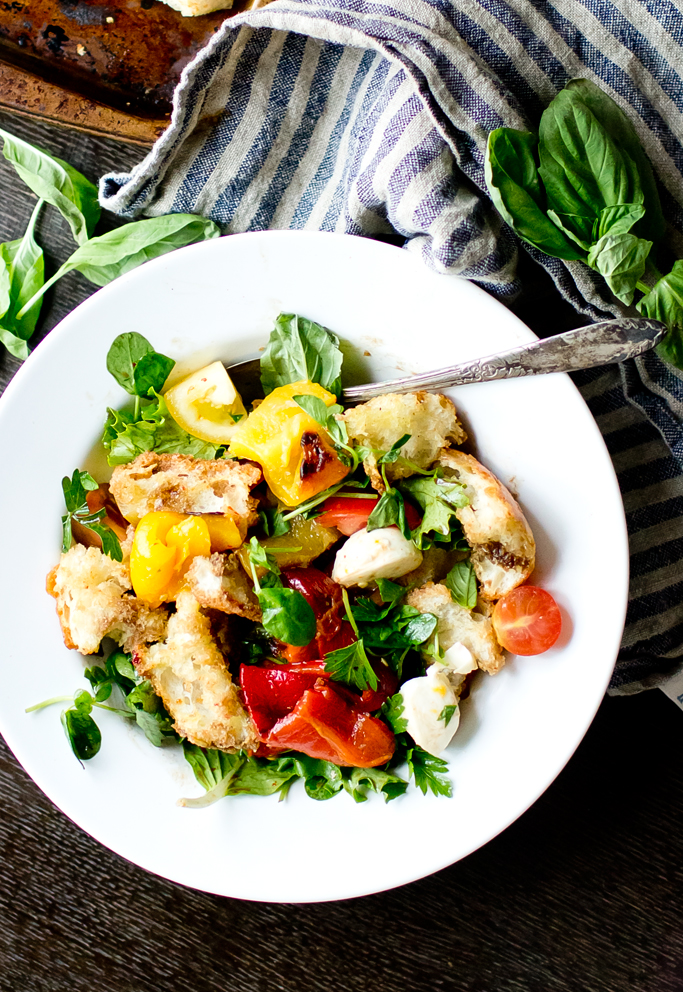 You know I’m loving this one Sarah! The bread, the fresh beautifully colored veggies! Count me in! And I think your photos look FABULOUS!!

Thanks Mary Ann! I appreciate the compliments on the photos too.. it’s a work in progress 🙂

I love your rustic presentation and the flavors of a delicious summer panzanella all with the grilled veggies. Wishing you a super weekend!

Thanks Bobbi!! This one was really refreshing yet filling. Have a great weekend!

Those bell peppers are gorgeous!

Me too! Thanks for stopping by and commenting!

I love how versatile this recipe is and your version sounds delicious ?

Now that is an extra special panzanella salad. Your photos are great, I feel like I could grab a fork and take a bite.

Haha thanks Karen- I wish you had been there to share 🙂

The use of stale bread in Panzanella reminds me of some of the hundred-year-old recipes that I’ve seen. Back then people often used dried (or stale) bread crumbs in a wide variety of dishes.

So true! Thanks Sheryl!

Happy summer to you!! In the summertime I’m all about roasting veggies, and putting them in a panzanella is genius, totally going to make this after my next farmer’s market haul 🙂