Our weather in San Diego this week has been rainy and cold this week.  Technically it’s been slightly overcast and in the 60s (but hey, we’re kind of wimpy here).  This slightly below-average weather had me craving some good hearty comfort food, specifically in the form of creamy soup.

We also happen have this amazing bakery here in San Diego that sells awesome breads, which had me all excited about bread bowls.

So really, the stars aligned and all that…

Incidentally, the bakery that I’m obsessed with currently is called Bread and Cie.  Again, it’s another Hillcrest gem (one of the best neighborhood for foodies in San Diego, in my opinion).  Bread and Cie distributes all over San Diego to many of the grocery stores and restaurants, so you don’t necessarily need to go to Hillcrest and brave the parking situation to acquire their baked goods.  However I think it’s worth a stop to the bakery as they always have incredibly fresh breads and you can always pick up a macaron or two to go. 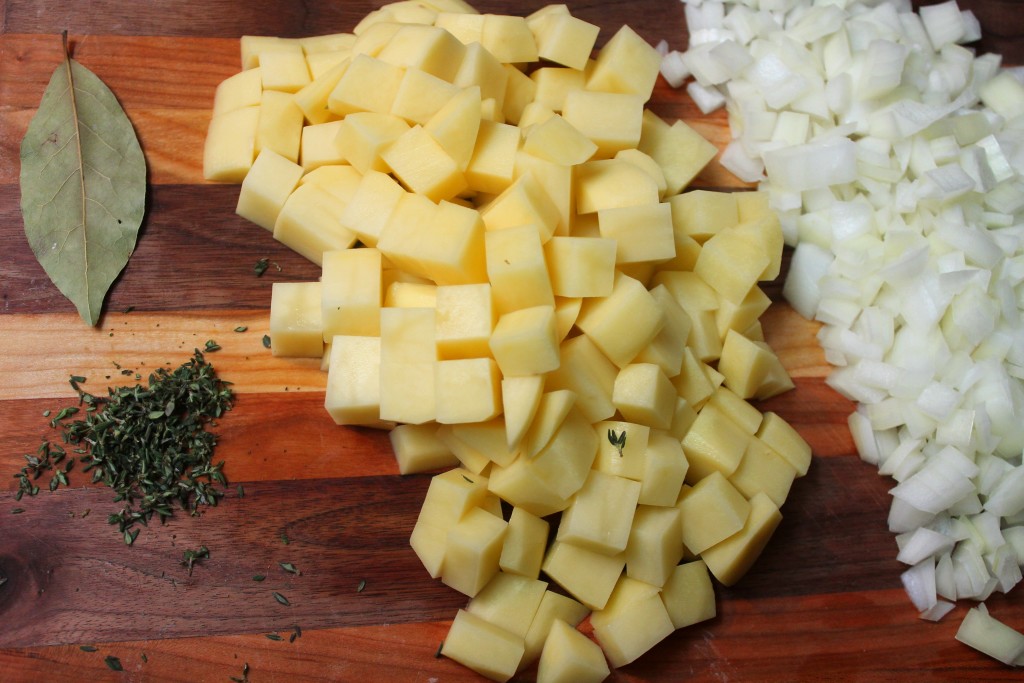 I love to use Yukon Gold potatoes because I think the flavor and texture is the best.  If you don’t have these at your grocery store or they don’t look particularly good Russets would be a fine alternative. 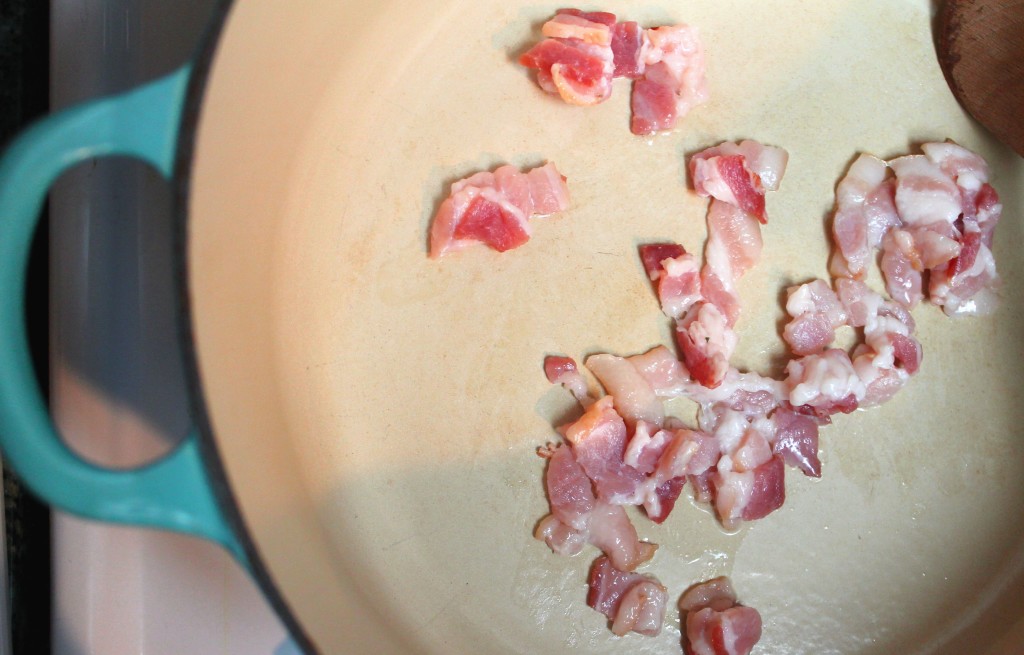 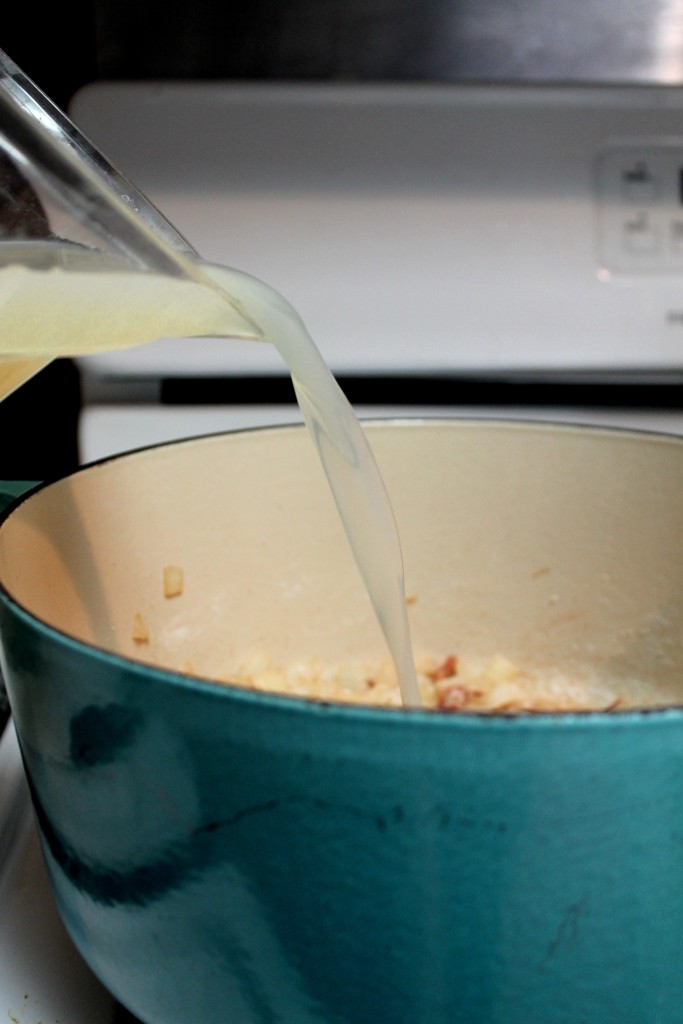 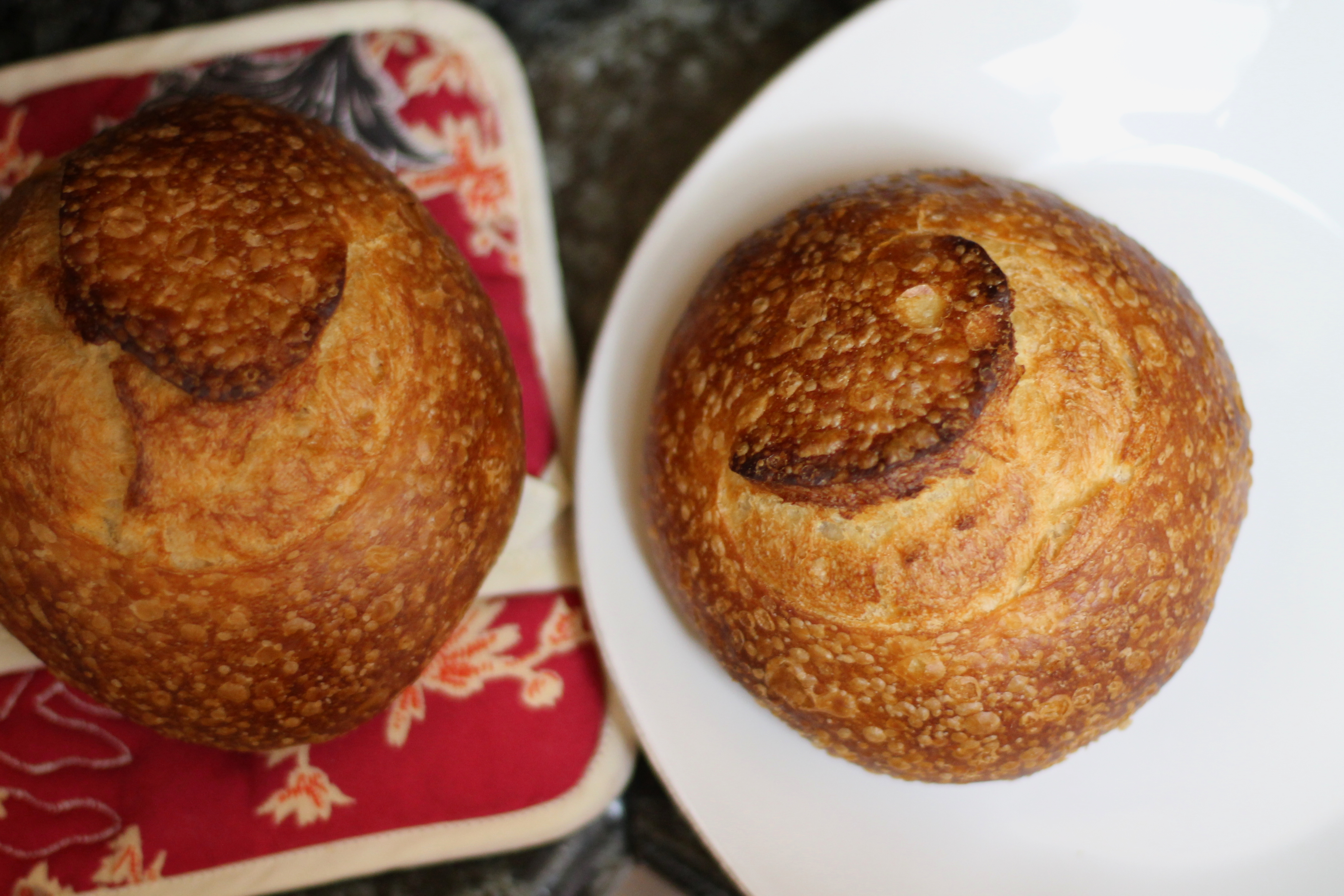 Look at those beautiful bread bowls (technically called bread boules, which basically just means “bread ball” in french).  So crispy.  So delicious.  For any bread, I always recommend that if you’re not planning to use it right away, freeze it immediately.  Fresh bread will go stale so quickly (yes, even using the “towel method”), and refrigeration kills the texture of nice bread. 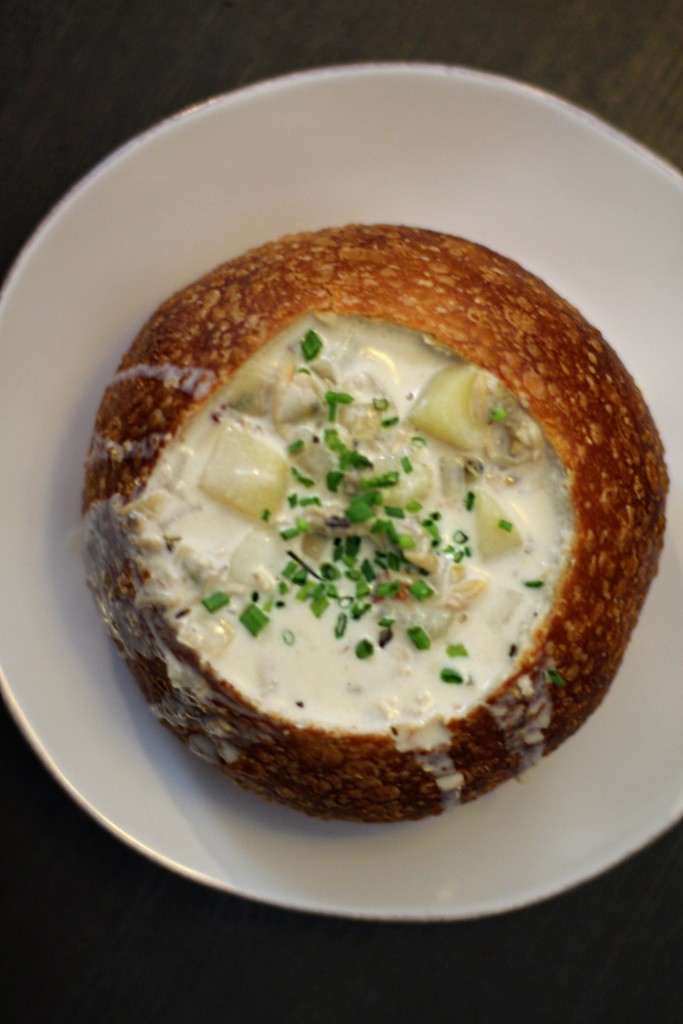 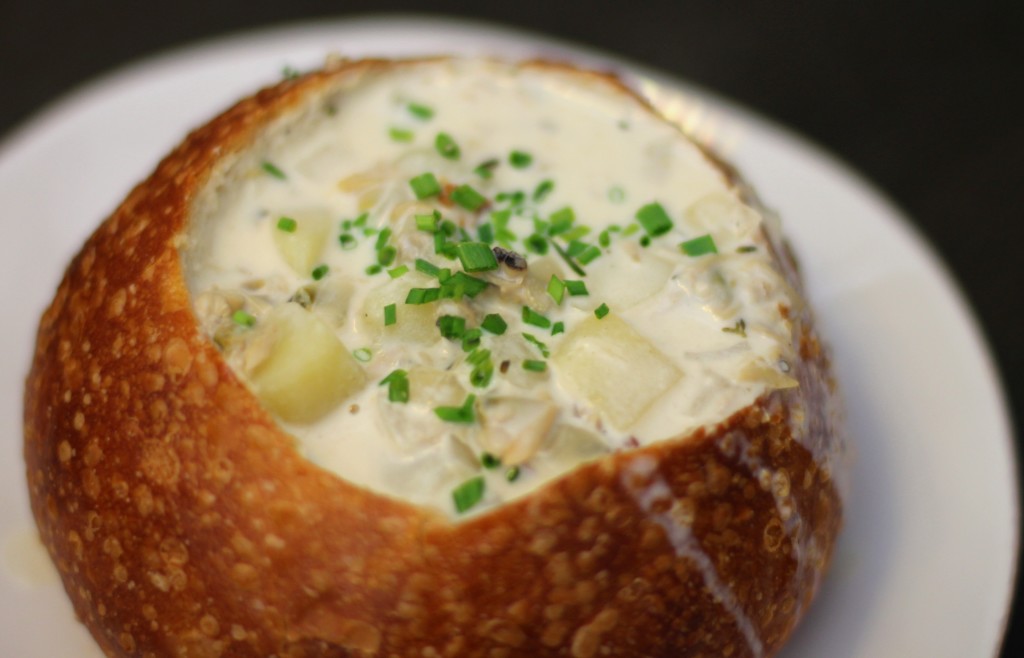 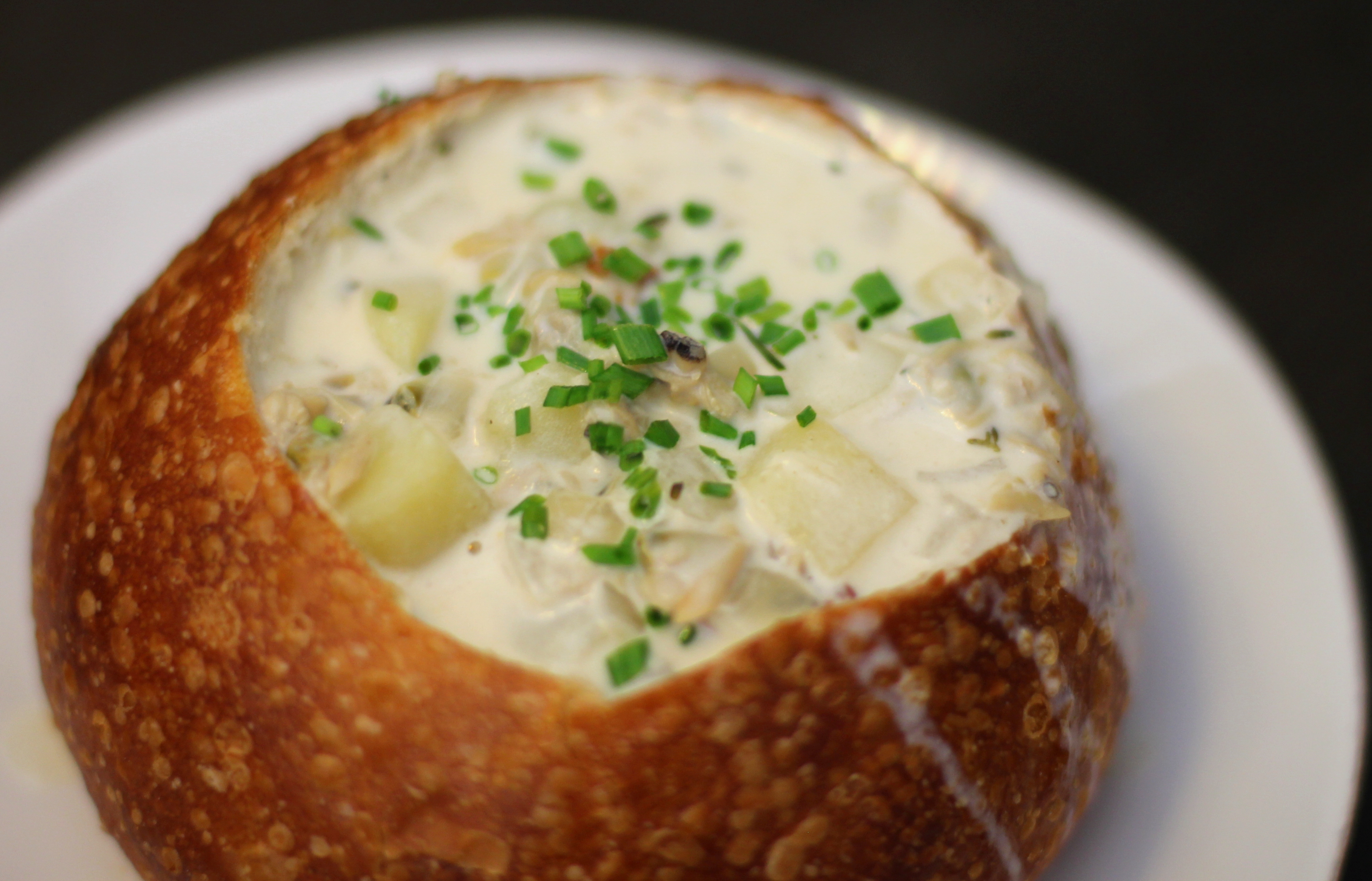 Ooooh! This looks so good! I sure wish we had sourdough here!

We’ll have to go to Bread and Cie when you come to visit!

Hi,
I’m from Brazil and here we don’t have canned clams, just fresh or freezed. I used freezed and just water replacing clam juice. For me, your instructions was perfect. The taste is the same I’ve tried once in San Francisco. Many thanks.

Oh I’m so glad! I feel like fresh/frozen clams are a perfect choice.

I am trying this recipe tonight! I’ll let you know how it turns out, though I’m sure it’ll be awesome.

Thanks! I hope you enjoyed it!!

This was so good! The only thing I did differently was I did add some garlic because we love garlic 🙂 Oh and I forgot the half and half so I used whole milk and swirled it around the box of heavy cream lol. I grew up in California but have been living in Ohio the past 5 years…..this recipe makes me miss home so much!

Oo I’ll have to try garlic next time I make this! Great idea 🙂 So glad you liked!