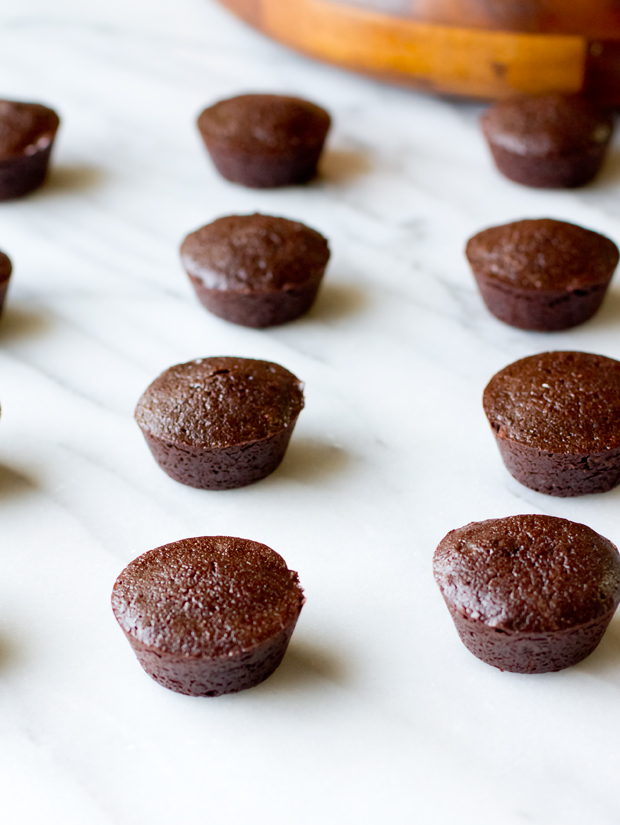 (It’s near enough to Saint Patrick’s Day to post these right?)

I made these little nuggets of pure chocolate-y, sugar-y, liqueur-y bliss (the about me page doesn’t lie) for a friend.

(I swear guys, they were for a friend….)

Specifically a friend with whom I entered into the following agreement: he would share valuable SEO tips and tricks and teach me how to use google webmaster tools and I, in turn, would provide him payment in trade.  And thus these Mudslide Brownie Bites were created in The Gourmet Gourmand kitchen and immediately shipped to San Francisco, where all the techies grow. 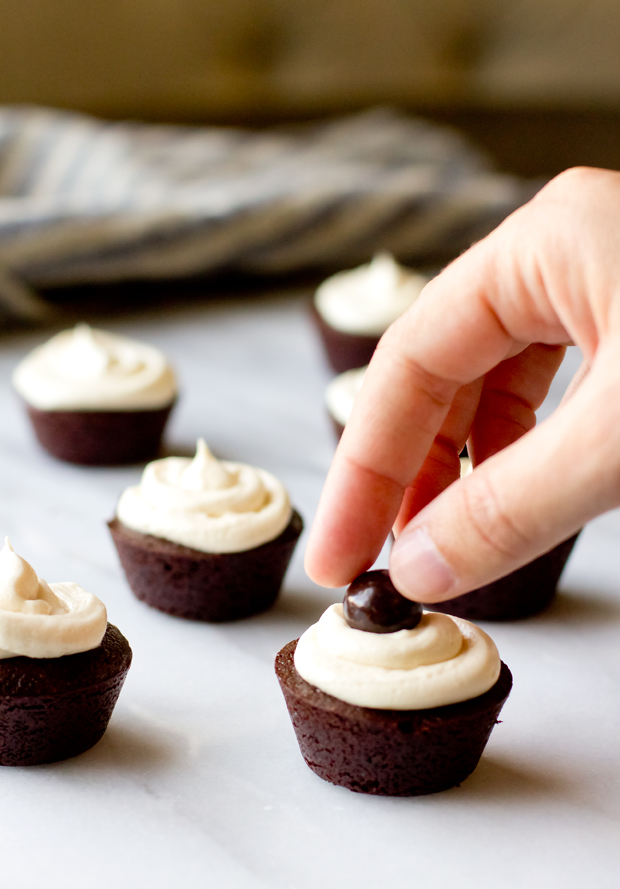 (Incidentally the SEO tips have been awesome and I’m seeing some search results growth already, so thanks Mike!  You’re the best!)

((And now my mission is to stop with the parenthesis for the rest of this blog post.))

Mudslide brownie bites are literally what you think they are- a brownie bite creation inspired by the sweet and boozy cocktail classic.  For anyone who has never had one, Mudslides are a cocktail made of Kahlua, Vodka, and Baileys Irish Cream.

So basically it’s the best drink ever.  And every excellent cocktail really deserves to be made into a baked good, amirite guys?

Let’s talk brownie bites. I thought brownie bites were going to be no problem so I adapted my favorite brownie recipe for a mini muffin tin and popped them in the oven.  Sadly this turned into a disaster called they puffed up and then collapsed again and turned into these weird brownie bowls that were quite delicious, but just not at all what I was going for. 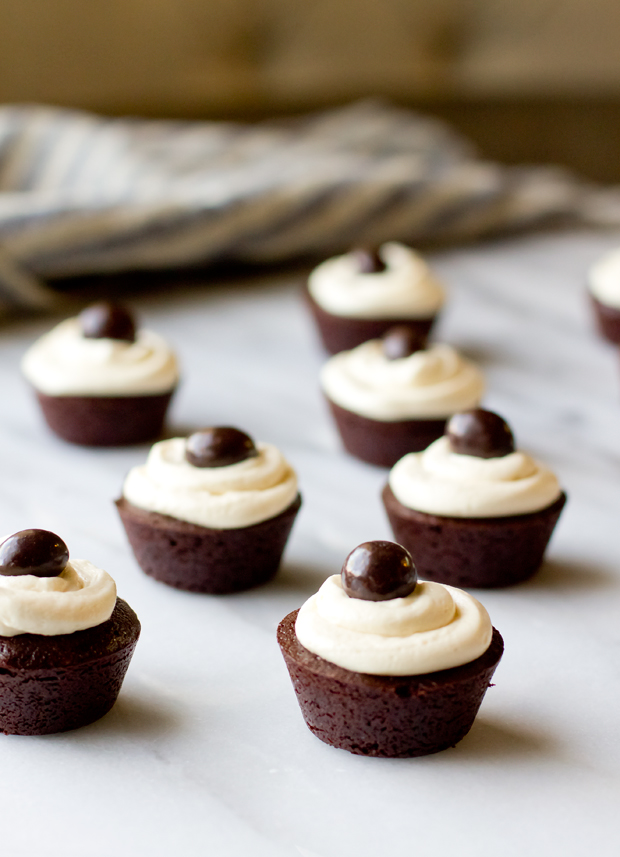 I puttered around the internet to try to figure out what I was doing wrong, and it seemed that most of the successful brownie bite recipes include a combo of melted chocolate and cocoa powder.  My original brownie recipes just included melted chocolate.

So I don’t know what’s up with that, or anything about the science of baking for that matter, but there might be something about the cocoa powder that makes the brownies a bit denser and less likely to rise.

Whatever.  I have no idea why these turned out better, but they did, and they were amazing.

(Erwin thought so too, although I managed to shoe him away before he poisoned himself or became intoxicated on baked goods…) 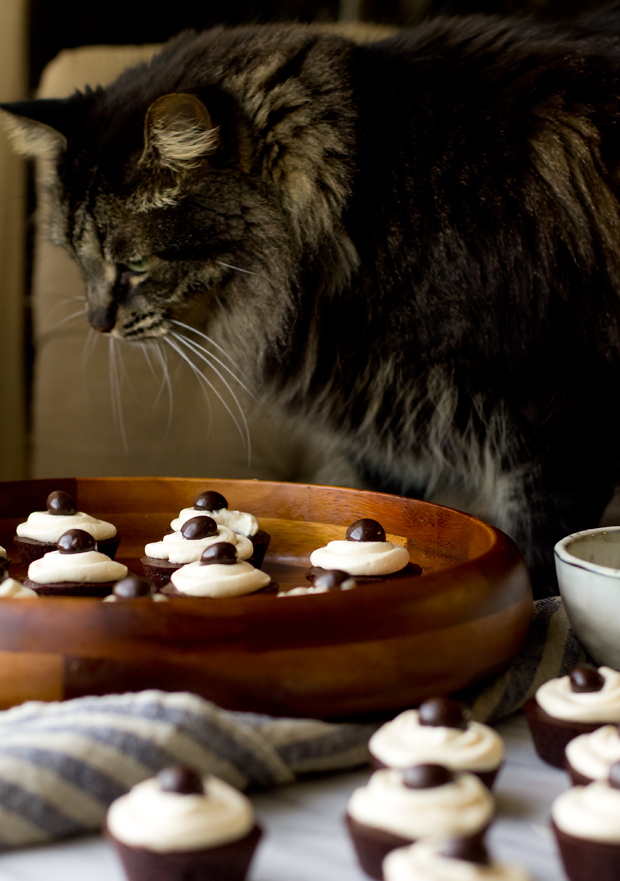 The batter includes both Khalua and espresso powder for a fantastically coffee-ish flavor.  And the Bailey’s buttercream.  Oh that buttercream.  You will want to pipe the entire bag of Bailey’s buttercream directly into your mouth instead of onto those brownie bites, I promise you.  Somehow, I magically resisted this urge of mine and managed to get all the buttercream onto the brownies.

Then I topped them all with a chocolate covered espresso bean for added adorableness and caffeination. 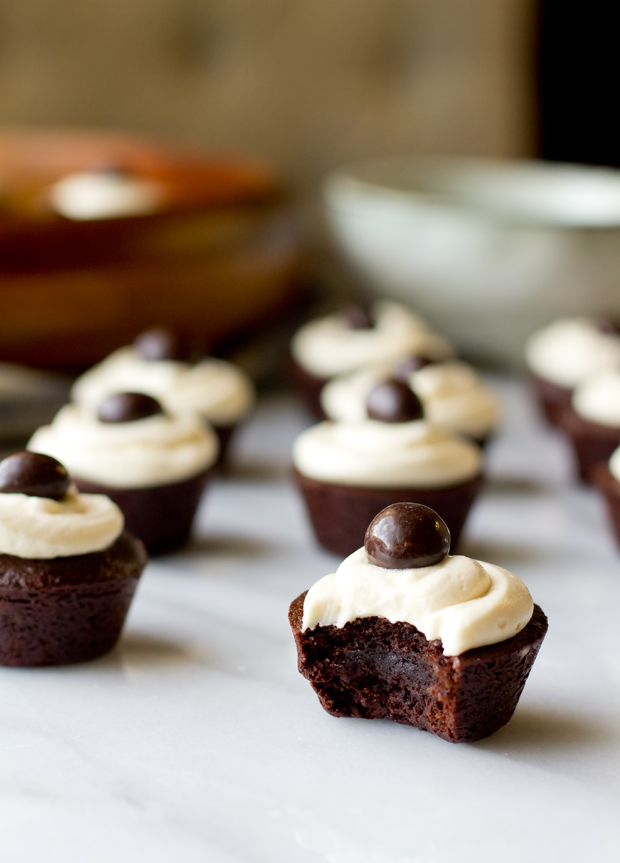 Did you make today’s recipe?  I love to see what my Gourmet Gourmandians’  are cooking up!  Hashtag #TheGourmetGourmand on instagram for free instalove.  (And, Uhm.. You rock 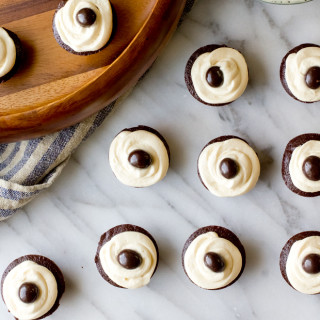 _For the Brownie Bites_

_For the Baileys Frosting:_

For the Brownie Bites

For the Baileys Frosting:

Wow. These look and sound really really good!!! I don’t know what SEO means, but congratulations!

Haha thanks Mimi!!! I really liked this recipe a lot- definitely worth the calories 😉 SEO means search engine optimization, so basically trying to make sure you’re tailoring things to maximize traffic generation from google searches. I didn’t really know anything about that stuff, but according to my friend Mike there are certain things you can do behind the scenes in wordpress to make sure posts are very searchable. Also- I’d be happy to share what I learned if you’re interested. Just shoot me an email 🙂

Holy WOW! These brownie bites look and sound phenomenal. 🙂
Nice work with the SEO too.

Thanks Anna! Booze and chocolate… my two favorite things 😉

What a fun post! It’s definitely close enough to St. Patrick’s Day for these. 🙂 They look incredible.

Thanks so much Sheryl!

I think the techy guys got the best end of this deal for sure… SEO info is great but brownies trump SEO points any day!

Haha thanks so much! I might have gotten to eat a few before sending them off 😉

Absolutely perfect! Love everything about these, but especially the small “bite” size.

Haha yes! Bite sized means you can just have like 5 and not feel so guilty, right?

I’m all about that frosting! Yummy!!

Oh! My! Gah! Can I provide anything to you? In exchange I’d take payment in the form of THESE! They sound soooooo sooooo sooo good (clearly I’m drooling over here, you have a lucky friend!)

I’m so glad your SEO guy helped you. I was given a session with a local guru who totally messed my blog up, and years later I’m still sorting out the issues. These look divine ?

Oh no!! That totally stinks!! So far I’m doing OK without any issues… He mostly just gave me verbal consulting advice and didn’t do anything with the website/code or anything, so fingers-crossed that nothing bad happens!

YES cocoa + melted chocolate is always so much more intense than just melted chocolate! Sounds like an awesome deal you have going on – would do almost anything for a delivery of these right now! x

Haha thanks so much Claudia! These were intensely chocolaty and intensely good!

Haha, I love the picture of Erwin contemplating the brownie bites! So great. These look TO DIE FOR and I’m seriously heading over to BevMo ASAP to get me some Kahlua and Baileys. I don’t have EITHER of these… the horror!

Omg that is Erwin’s standard pose during most of my photoshoots… I’m glad to finally have caught him in the act 😉 And LOL!! I have spent wayyyy to much time at BevMo recently… hosting friends, Dave’s birthday, (wine for “a friend”)….

These sound fabulous Sarah! Mike is one lucky guy! It’s clear that Erwin even knows how good these are!

These brownie bites are so adorable and so is your kitty! 🙂