Lamb Tagine with Chickpeas and Apricots 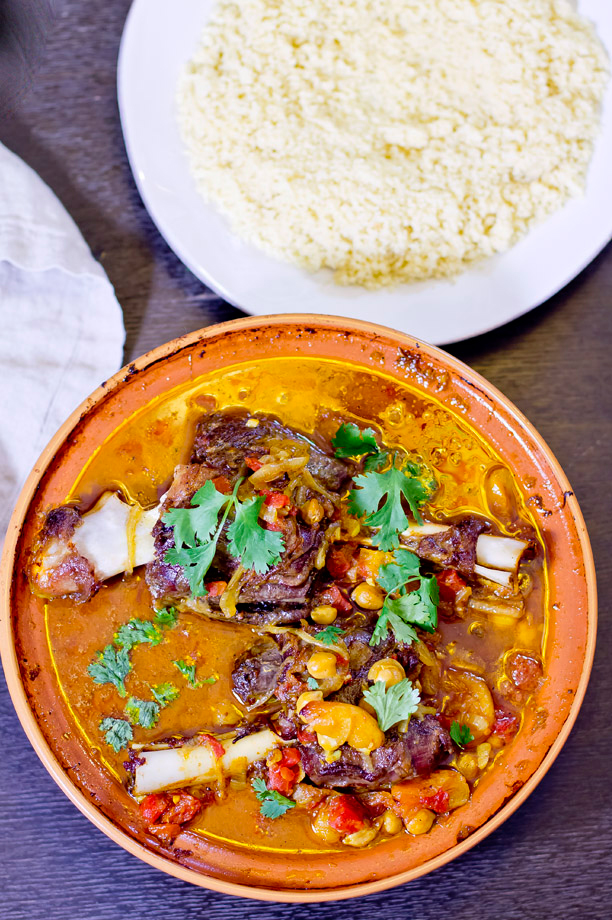 No seriously, Lamb Tagine with Chickpeas and Apricots is that good (..that it inspired my first ever blog-diary entry).

Let’s just recap tagine in all it’s glory.  First of all, it’s also known as tajine.  Spelled differently, pronounced the same.  I spell it “tagine” for no other reason aside from the fact that the first time I saw it spelled this way at the first restaurant that served me tagine and the spelling stuck in my mind ever since..

The word tagine is actually both the name of the meal and also the name of the iconic clay vessel that is used for cooking.  A tagine vessel consists of 2 pieces- the rounded bottom (where all the food goes), and of course the conical shaped top (not pictured) that goes on top that helps trap steam and return the moisture to the food.  Allegedly this allows a drought-resistant part of the world to slow-cook food with very little water.  It’s like a little recycling chamber.  (Okay California… stop watering those almonds… we’re need to become the US tagine capital!!).

Ahem, anyway.. Tagines are of Berber origin and are used throughout North Africa (probably most notably Morocco) for braising all sorts of dishes, most commonly various types of meats or hearty vegetables.  The trick to a good tagine dish- braising that meat low and slow and not being afraid of adding a little spice. 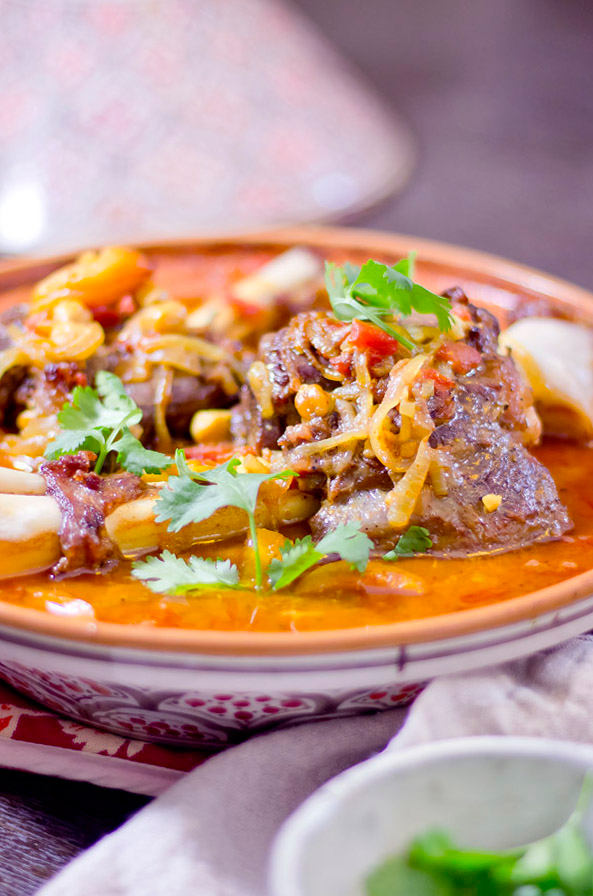 Specifically, Ras el Hanout, which is the name of a traditional North African spice blend.  My recipe includes a list of spices that would commonly make up a Ras el Hanout blend, but are listed individually because I doubt most people want to go out and buy some Ras el Hanout.  In addition to spices, most tagines will have a mixture of sweet and savory elements.  In this case, the tagine is made up of tender falling-apart lamb shanks and a sauce made up of onion, garlic, tomatoes, chickpeas, and apricots.  Can we all collectively say YUM?! 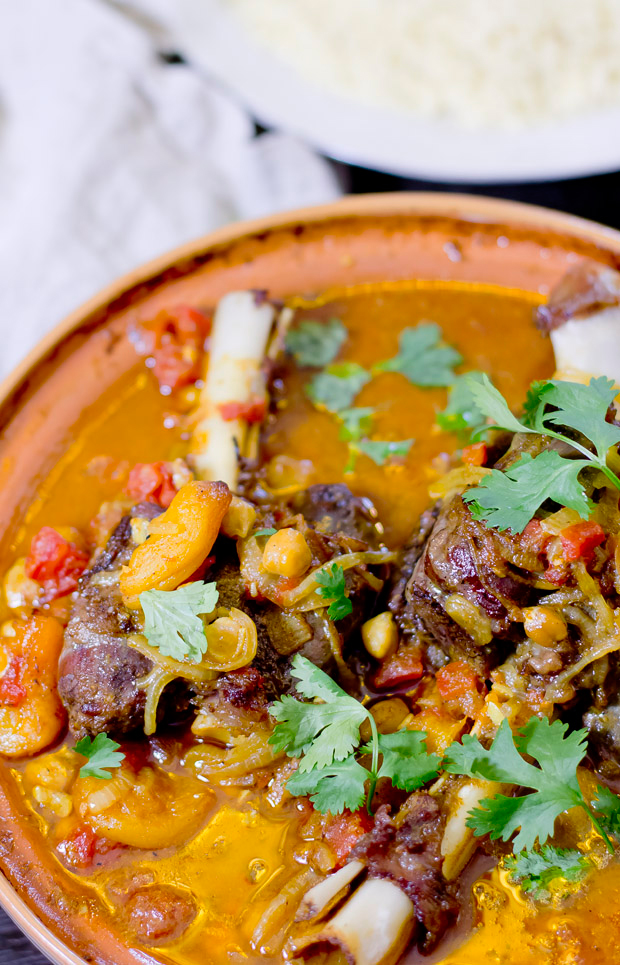 And vegetarians- While I can’t with 100% certainty say this would be the greatest tagine ever if you omit the lamb shanks and add more chickpeas (because.. lamb fat and bone marrow = so much flavor… mmmm), I CAN say that I did find myself diving in for extra chickpeas long after my lamb shank was just a bone on my plate.

(That’s my best attempt at a legume endorsement… eat them but know they’d be better if you slathered them in lamb bone marrow).

And diary, remind me to start dieting… next week.

Lamb Tagine with Chickpeas and Apricots

First things first, that is the most beautiful tagine (vessel) ever! Loving the colours!!
Secondly, chickpeas, apricots and lamb in a tagine is what dreams are made of. Gorgeous! 🙂

Ahh thanks so much Sune! 🙂

YUM is right. what a beautiful sight. I wish my husband would eat sweet with savory. i can never use any kind of fruit with meat. sigh.

Those husbands… 😉 Dave also isn’t usually a sweets person, but for some reason with this tagine it isn’t overpowering so he still was able to enjoy it. I honestly think you could skip the apricots and it’d still taste amazing. 🙂

This has to be THE most gorgeous tagine I have ever seen! SO colourful, and that lamb with the vibrant herbs, apricots and spices (LOVE ras el hanout, very with you there!) sounds like it needs to be right at the top of my to-make list. Such a warming meal – Morocco is definitely a country I would love to visit. x

I know! Me too! Morocco is definitely on my travel bucket list. Hope you give this one a try- I promise it’s worth it 🙂

This is delicious! I made it last night, and am eating it right now! 🙂 Thanks for the recipe! I added honey and 2 tablespoons of strawberry preserves to the onion mixture. I also used beef broth, instead of chicken, and I added mint leaves and cashews to the mix. – Olga