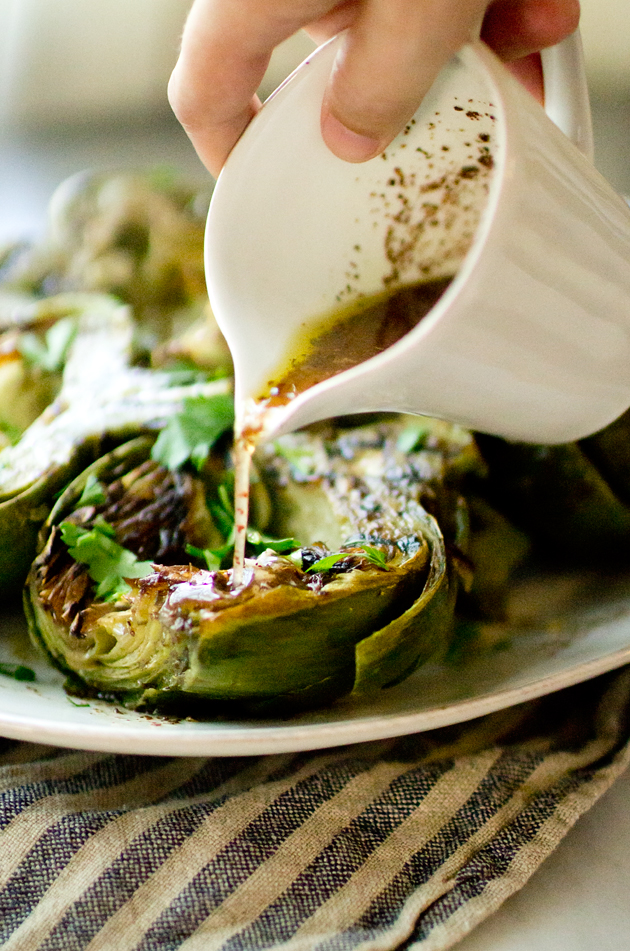 As a blogger I kind of feel guilty posting recipes that I’ve only tried once; my reputation is supposedly “food expert” but how can one be an expert in a food one has only attempted once?  But, I also hate repeating recipes due to my easily bored palate.  As it is I can hardly deal with even eating leftovers from the day before.

They either make their way into Dave’s belly or they inevitably get tossed.

Thus, it is confession time- I have never actually dealt with raw artichokes before I attempted this recipe.  So rather than this being considered an “expert tutorial” lets all call a spade a spade and say this is a photo documented first attempt.  But, unlike my norm of easy boredom in the kitchen and flavor department, after this culinary experiment, I plan to come back to this method time and time again.

These grilled artichokes with sumac dressing were spot on. 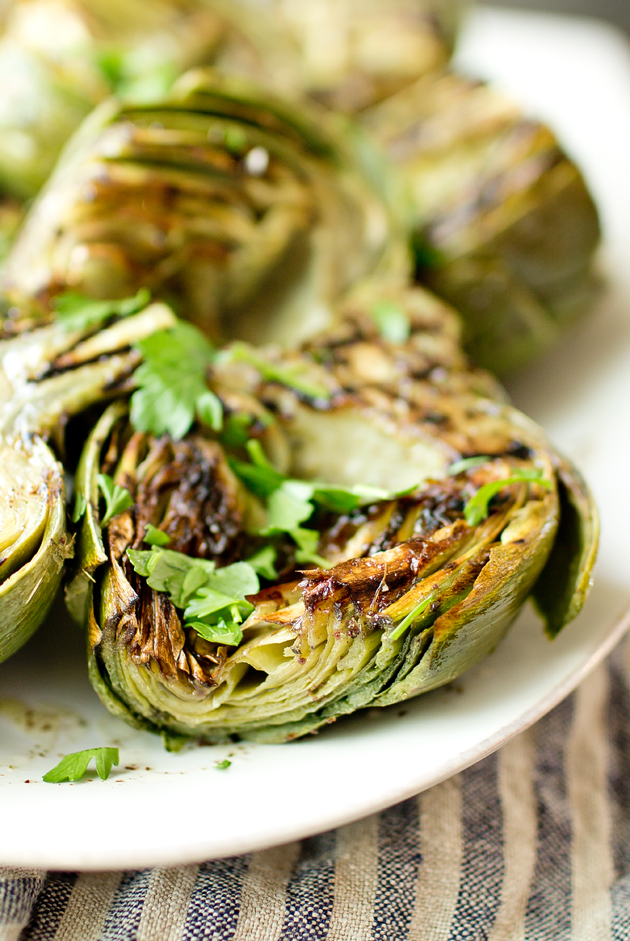 Artichokes do have a specific method that need to be followed when preparing them.  But it’s really not that difficult once you get the trick.

And the reward is so well worth the effort. 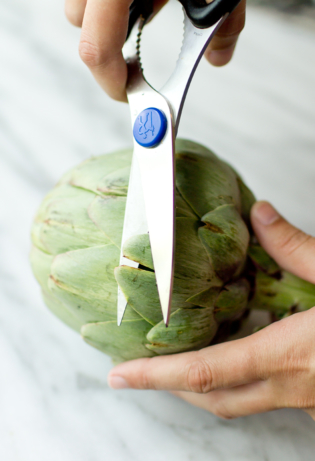 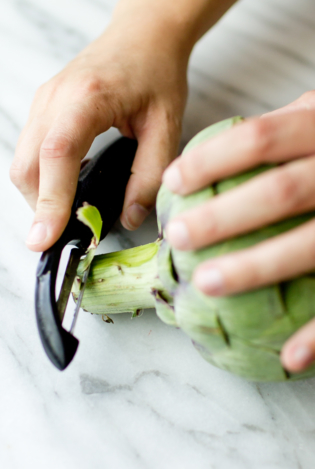 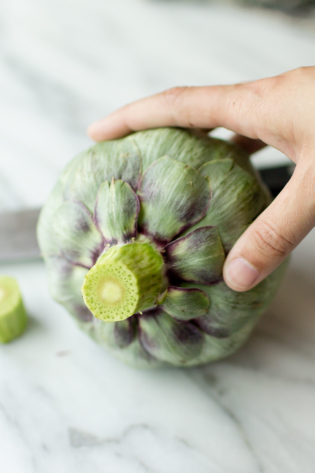 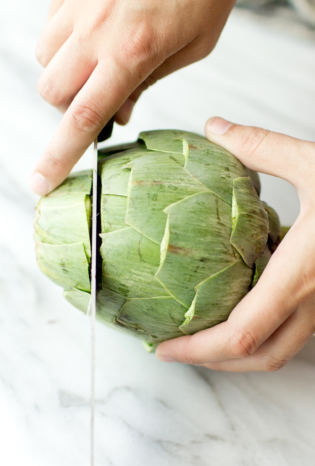 The first step is to use a kitchen shears to chop off the tops of the leaves, especially if they are thorny.  Really, no one deserves a thorn in their tongue in the name of gourmet cooking, agreed?

Next, I used a vegetable peeler to remove the bitter outer layer of the stem.

(And then chopped off the bottom part of the stem).

Finally, I chopped off the top1/3 of the artichoke, “the crown” as I like to call it, which is basically just a bunch of fibrous spiny leaf tips. 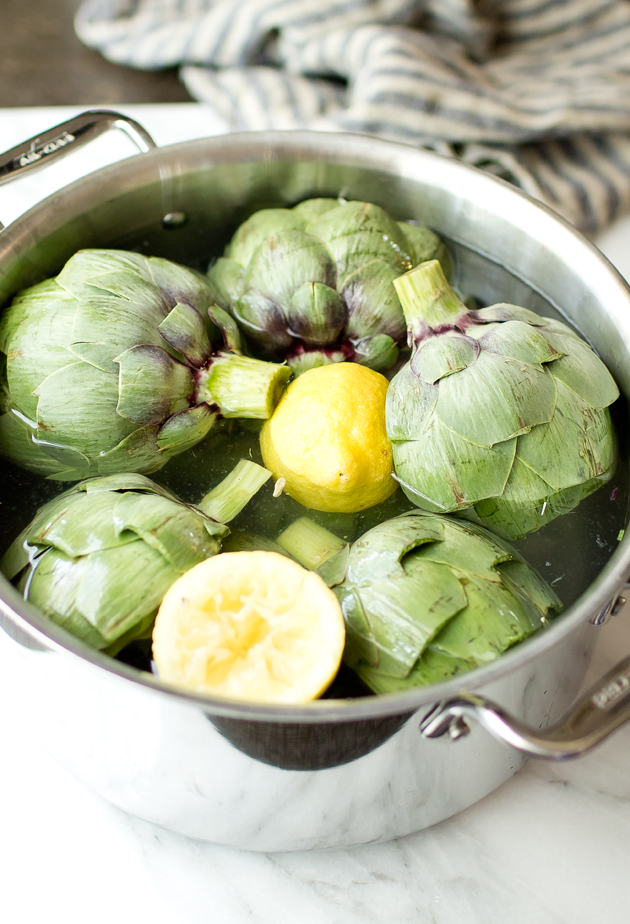 Cut it in half and toss it in a pot of lemon water to clean them and prevent browning.

Boil the artichokes, per instructions, and then you want to make sure you remove the inner “choke.”  I apologize that I didn’t get a photograph of this, but you’ll know it when you see it.  It’s the fuzzy white part on the inside of the artichoke that attaches to the heart.  You can just scrape it out with a spoon after the artichokes are cooked. 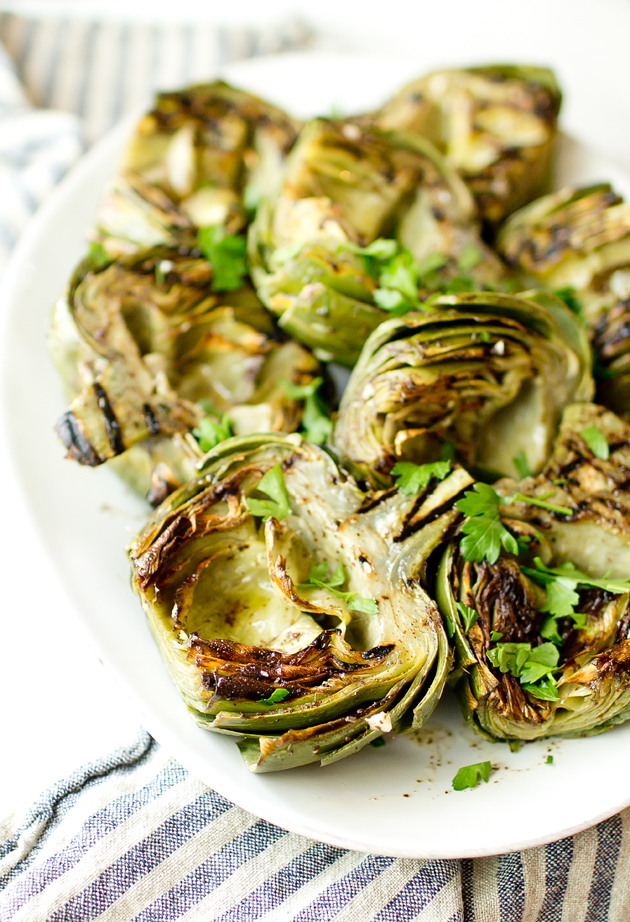 Finally, I popped the artichokes on a grill pan for about 10 minutes to get beautiful char and smoky flavor.

And whisked together one of my favorite salad dressings of all time- Middle Eastern Sumac Dressing.  It’s the standard dressing that goes on Fattoush salad, for reference.  The sumac is tangy, citrusy, and bright.  It’s the perfect accompaniment for this glorious delicacy of summer.

If you’re in the market for sumac, it sounds exotic, but it’s pretty widely available these days.  I’ve seen it at most of my standard go-to grocery stores (Ralphs and Sprouts), and they also sell it at Whole Foods.  If you can’t locate it locally, it is available to be ordered off 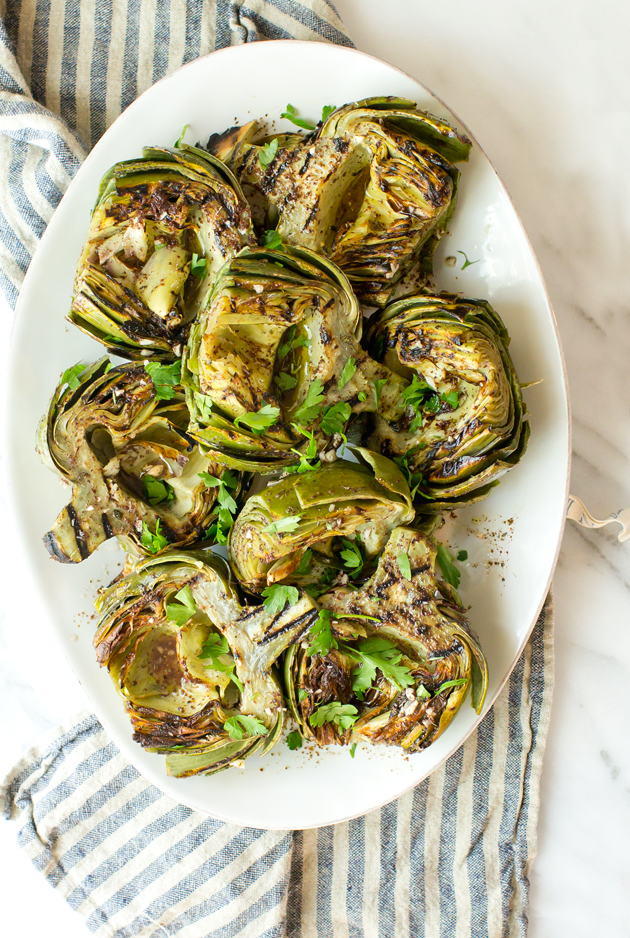 I hope you enjoy this one as much as I did! 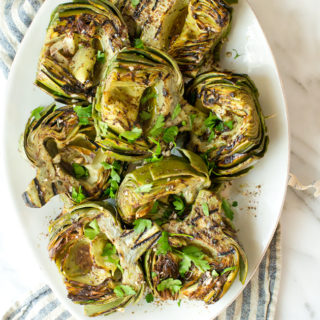 You’re so funny Sarah! I will confess, I have never cooked an artichoke! Never cleaned one, never cooked one but when someone has made an artichoke dish I’m always all in. Now that you’ve taught me something, I have no excuse to do it myself! This sounds delicious!

LOL! They’re a little fussy, but it’s really not that difficult. An effort well-spent in my opinion 🙂

I have never touched a fresh artichoke bc I was nervous but all your step by step photos make it look possible. They look so delicious when grilled and topped with that yummy dressing!

Dang girlfriend, for your first attempt with raw artichoke, I’d officially say you KILLED IT! I loooove artichokes, and I haven’t been eating them nearly as often as I should this season – which is daily. 😉 Grilled artichokes are the BOMB, so these are toe-ts calling my name! I bet these are AMAZING with that sumac dressing! SO GOOD! I could eat a platter of these babies in record time! Cheers, friend! <3

Aww your comment made my day! Thanks Cheyanne 🙂 You’re so sweet and supportive!

Sumac dressing. It looks wonderful. I bet it works well with a variety of green veggies.

Thanks Ellie! Nice to see you here 🙂

Beautiful! I love artichokes and this sumac dressing sounds delicious. Sumac is such an exotic flavour!

Hey, when a recipe works perfectly, it just works, right? These grilled artichokes look so good, and that pour shot is beautiful, makes me want artichokes asap!

I absolutely love sumac. In Italy we get baby artichokes which are easier to prepare so I will try this recipe using them instead when we are there ?

These grilled artichokes are fantastic! Thanks for making me hungry;) I love fresh artichokes!

Thank you!! Glad you liked this one 🙂

My oh my, I love this! looks like a perfect combination with some grilled meats. Yum!

Heck yes! Thanks Raymund. We actually had this with grilled lamb chops with some garlic and parsley. It was summer perfection!

What a wonderful, flavorsome dish! I love the addition of sumac!

Thanks Katerina! Sumac is such a unique ingredient- I just love adding it to salad dressings.

This looks absolutely wonderful. If you hadn’t confessed, I’d never have known that you weren’t an expert at cooking artichokes. 🙂