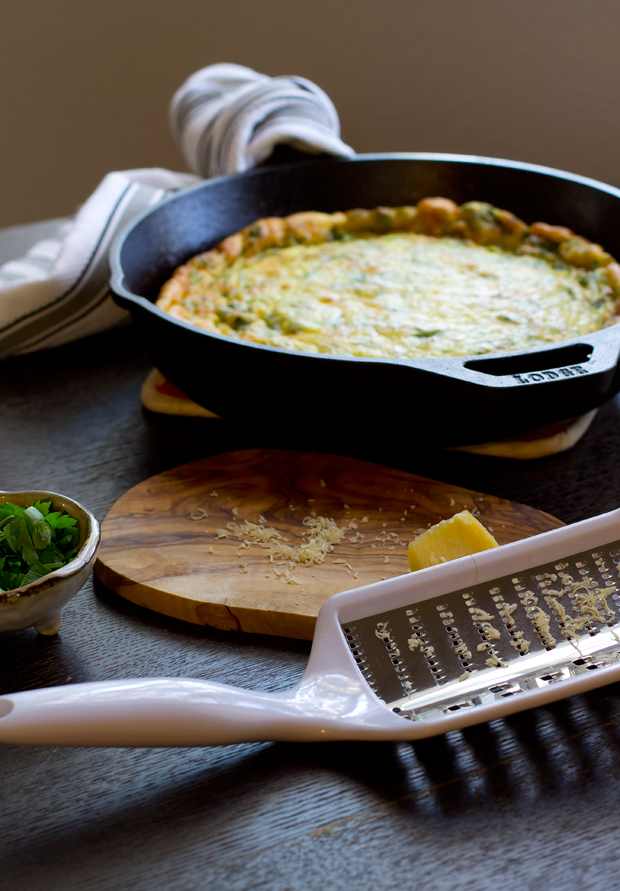 Frittatas are literally one of the easiest recipes to make.  Also I love using my cast iron skillet.  So in my mind, this recipe is a brunch win-win!

Frittatas have been trendy for years now, but for anyone that hasn’t ever made one, they’re crazy easy, but there are a few key components that you need to know…

1) they are an egg based dish similar to an omelette… like an open faced omelette.

2) they are Italian in origin.

3) the word frittata translates to “fried” so you know you’re about to eat something decadent and amazing.

4) you can throw whatever the heck you want into the egg mixture and it’ll probably turn out amazing as long as you have the correct ratios of eggs:milk:cheese. 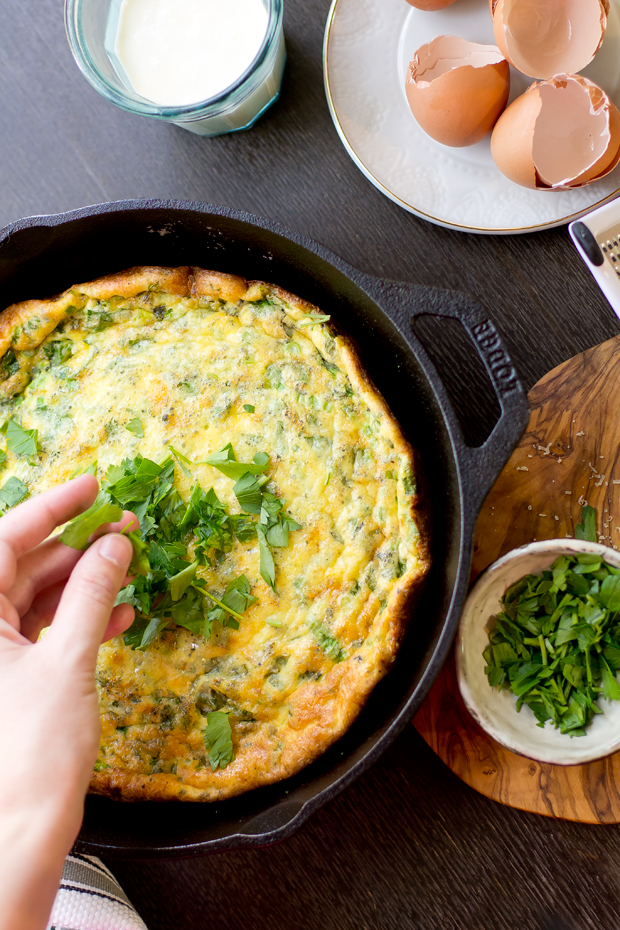 This is honestly less of a humble brag- I’m more creatively frugal than you- moment, and more of an illustration that you too can literally use whatever leftover veg (or even meat!) that you need to use up before it goes bad.  I always get sad throwing away soggy and smelly bags of use-to-be-herbs, so this gave me an excuse to use them up before the inevitable decomposition began.  I think this recipe would also work well with arugula, mushrooms, onions, or any type of pre-roasted vegetable.

And thus! With minimal preparation and happy avoidance of grocery stores, this fresh herb frittata was born straight out of the Gourmet Gourmand oven. 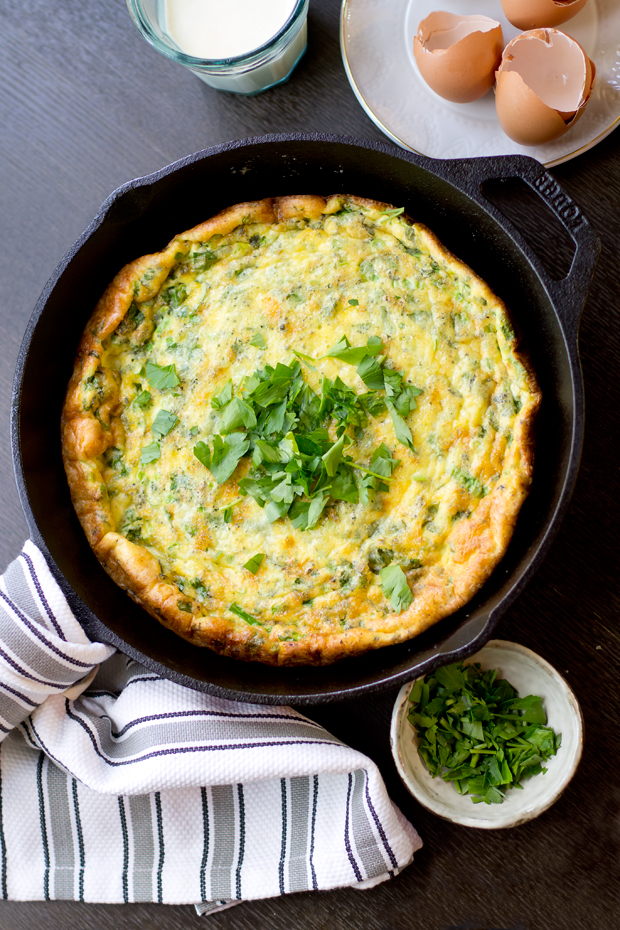 SO! As advertised, let’s talk method:  The ingredient prep is super easy. Just get a big bowl and literally dump all the ingredients together and whisk them together.  You do want to season your frittata at this stage with salt and pepper (although if you are adding a generous helping of irish dubliner go light on the salt) so that the finished product tastes delightfully seasoned instead of bland.

Meanwhile begin heating some olive oil in a skillet over medium heat.  Then just pour in the egg mixture and set your timer to 5 minutes, and wait!.  Do not be tempted to fuss with your eggs or “check” the underside.  It won’t burn, I promise!  You have my permission to turn it down to medium-low if you’re getting worried… But, the last thing you want to do is to fuss and have a frittata turn to scrambled eggs or disrupt the beautifully puffed topping. 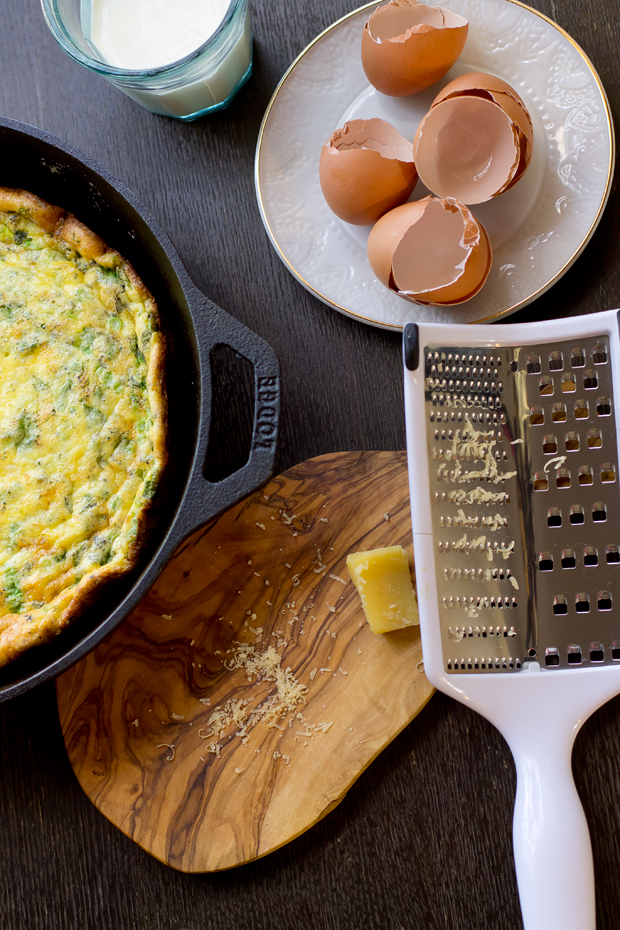 Speaking of the topping… now’s the time you want to sprinkle some more irish dubliner all over your frittata for extra cheesiness.

There is nothing worse than eggs the texture of shoe-leather, amirite?

If you desire a browned lid on your egg-y masterpiece, I recommend popping it in the broiler for a few seconds to a minute (depending on how aggressive your broiler is.. mine tends to be quite aggressive so I err on the side of seconds). 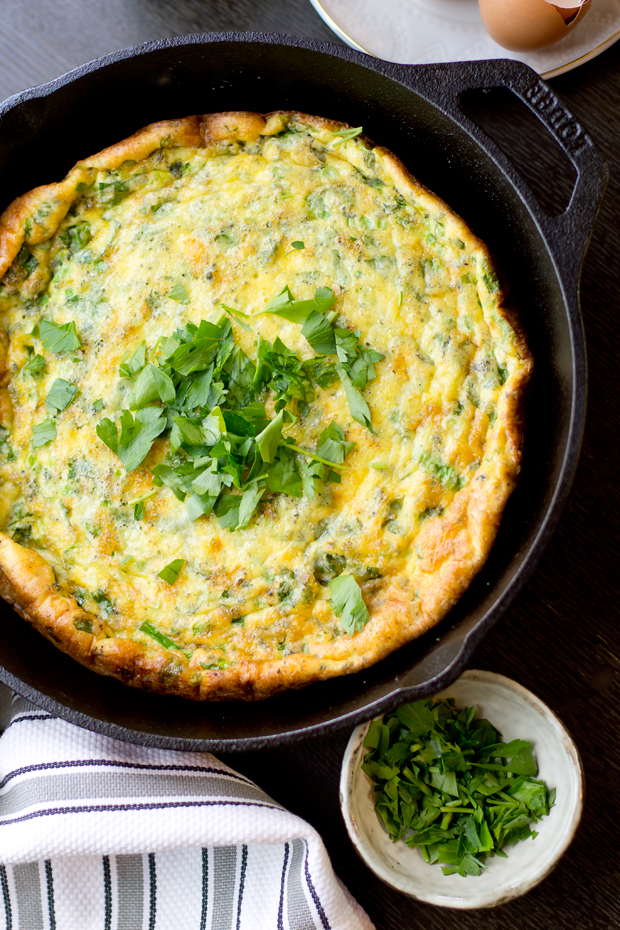 Serve your frittata straight from the cast iron skillet, or! you should be able to easily slide a spatula under the frittata and lift it completely out of the pan for serving. 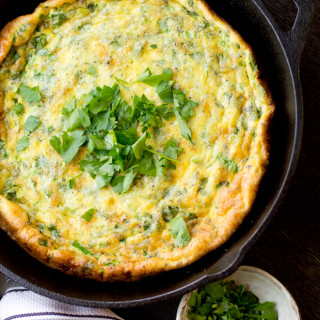 This just reminded me how much I love frittata, and how long it’s been since I made one! I just put this on our menu for the week – I love frittata for dinner 🙂

Frittatas are my favourite weeknight dinner to make.. ever. Definitely going to try your fresh herb version. Ideal for the weather here in Australia!

Ahh thanks Thalia! Hope you enjoy it 🙂