If I had children I’d say these were a celebration treat for back-to-school.

But I don’t.  And these were made for no other reason except for the I-wanted-cinnamon-sugar-in-my-belly-now reason.

Which, for some people, might cause a little confusion.  So let’s talk a little history about me and my personal relationship with cinnamon rolls.

For the majority of my life.

I think it was something related to my exposure to the wafting odors of Cinnabon at every mall and airport that did me in.  I know people who go nuts for that smell.  To me it was the smell of death.  And I was very loud and opinionated about my complaint for many years.

Then something changed- at some point in adulthood I became a new appreciator of cinnamon-sugar-laden desserts.  (And I perhaps had my first cinnamon roll sans cream cheese frosting or other white glaze).  I do think it had something to do with trying layered cinnamon bread in Europe and realizing that this combination is really wonderful and doesn’t need to be anything. like. Cinnabon. 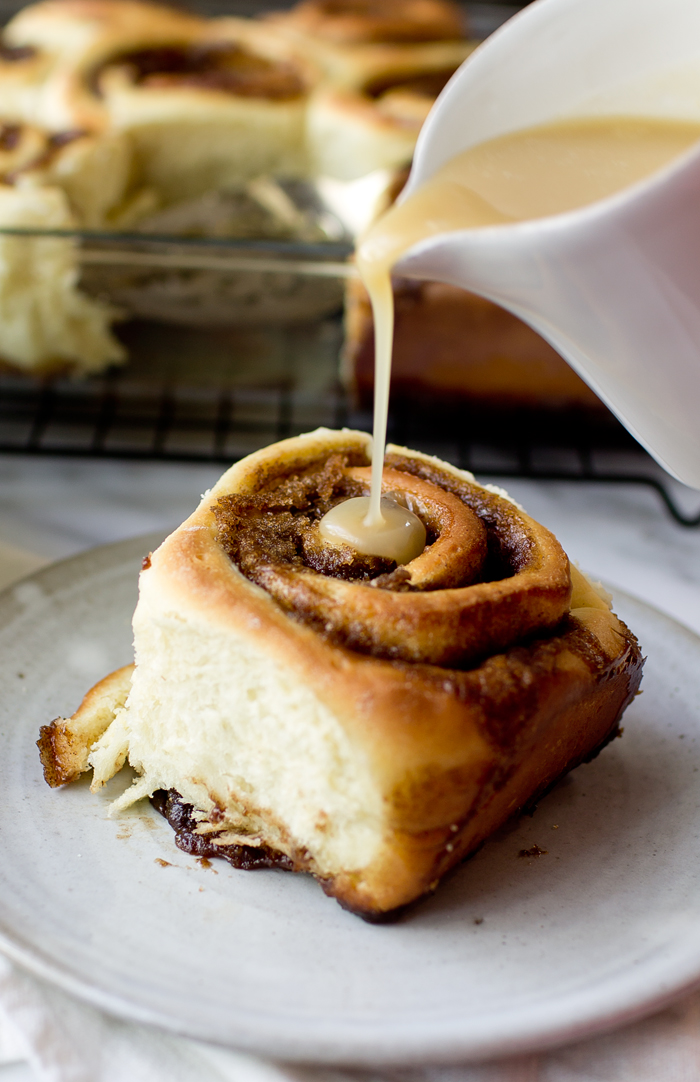 And as Dave really only eats desserts in the form of cinnamon, I knew what I must do.

Hence I commenced with cinnamon roll creation.  I scoured the internet and found thousands of options.  But the one from Tasting Table really stood out in my mind due to the brioche pastry, generous quantity of cinnamon sugar, and the syrupy vanilla glaze (none of that white glaze nonsense).  Thus, convinced of our similar values in what best makes a cinnamon roll, I began.

These cinnamon rolls are really a labor of love.  They take at least 2 hours of commitment on the short end (i.e. if you don’t screw anything up), and about 3 hours if you’re like me and can’t seem to figure out how to activate yeast (I included my instructions below for successful yeast activation). 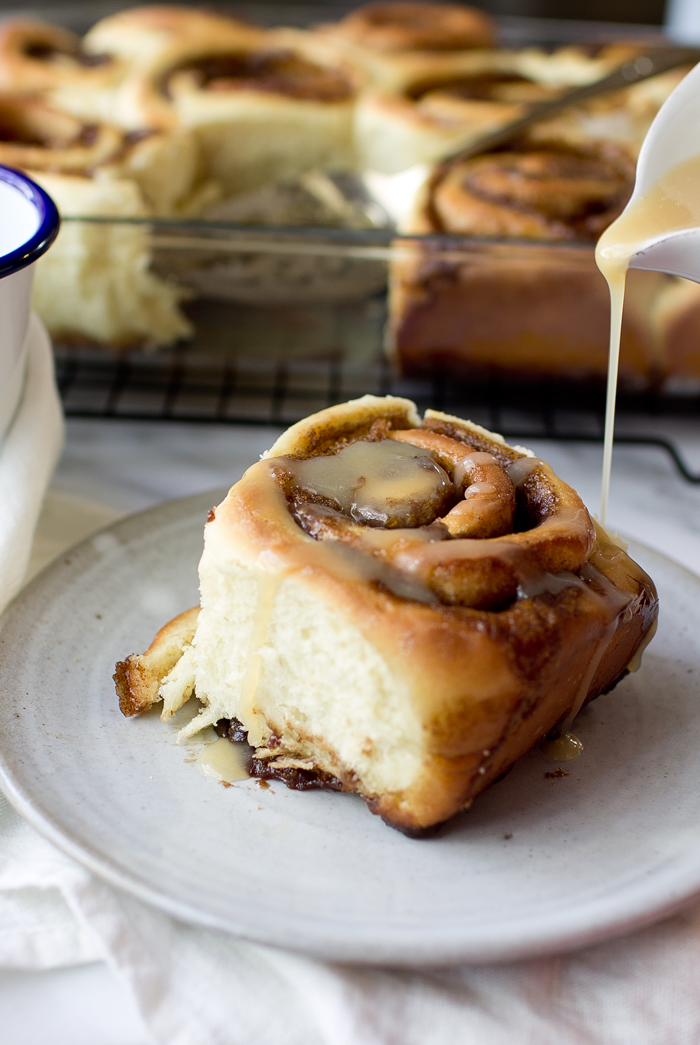 But really, I do think that these cinnamon rolls, despite their time-intensivity- are worth every step and are definitely achievable for the average at-home baker.

The results are a perfectly puffed brioche dough with layers of melting cinnamon sugar/butter, and a carmelized and sticky bottom that will make you want to cry with bliss. 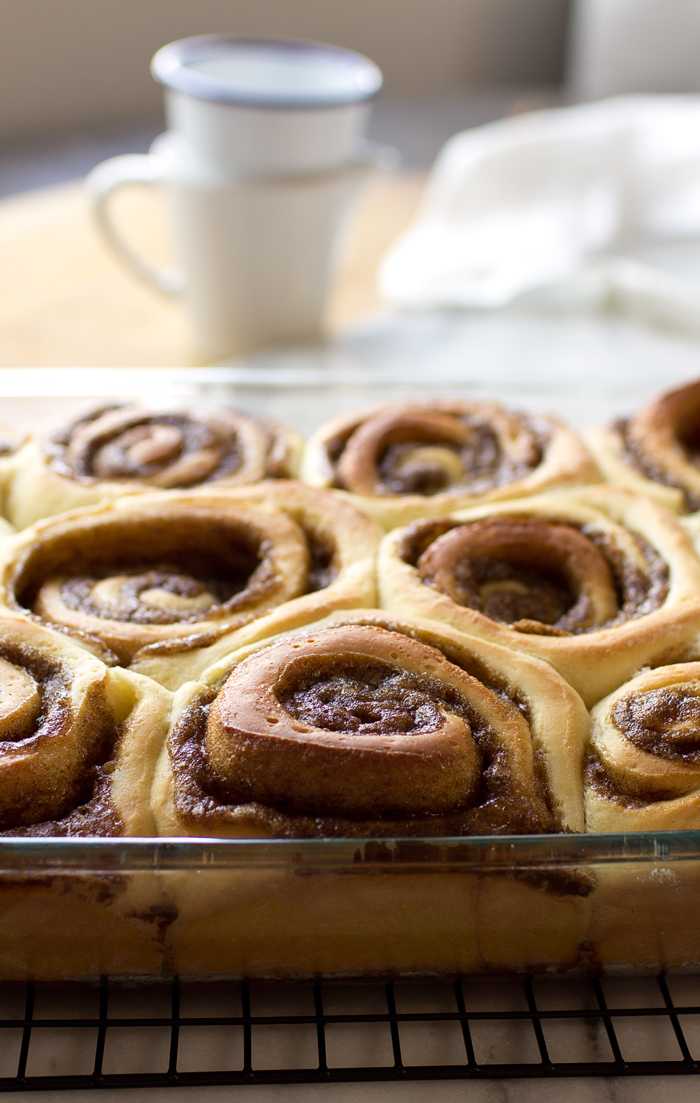 The warm vanilla glaze is almost like a dulce de leche and, in my opinion, is the perfect (non white) glaze to pour over these cinnamon rolls.  Dave preferred his plain.  I preferred mine with extra sugar.  (Yup, that’s how we roll). 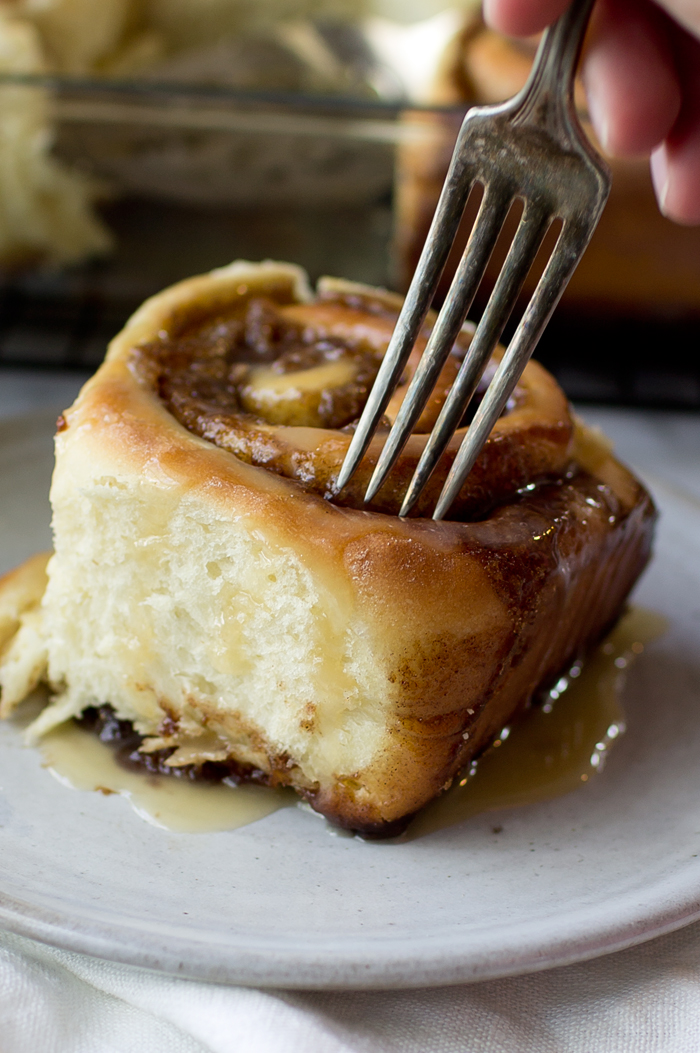 So thank you Tasting Table for the most amazing Cinnamon Roll recipe known to man.  (And- personal success – I did manage to stop after 1 roll and put the rest in the freezer for when guests come this weekend).

Have a wonderful week everyone! 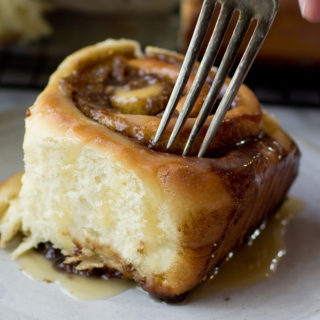 My kids would go crazy for these. And wouldn’t I be the best mom ever for making them this week for back to school. Yes! Looks so tasty!

Haha I’m sure you’re already the best mom ever! But a little bribery in the form of cinnamon can’t hurt anything 😉

The extra time is so worth it Sarah! These look perfect! That first photo! Perfection!

Thank you so much Mary Ann! It means a lot coming from you 🙂 🙂

Maybe your water was not the perfect temperature? I could go for one of these right now. They look scrummy ?

Haha it’s very possible. Also the original recipe said to have it activate in milk with butter…? I think that had something to do with it. It worked a lot better with a water + sugar combo.

These look like heaven in a baking dish.SO fluffy and gooey and ugh, I need them in my life right now. LOVE!

Thank you Karly!!! They definitely met my desire for a fluffy and gooey treat 😉

I’m not sure how you had only one and then saved the rest!! Gold award material, right there. My sisters and I used to fight for the rolls that weren’t on the edge of the pan – you know, the slightly undercooked, still doughy but so warm and delicious? I’m thinking these will be perfect for Christmas morning when we always have cinnamon rolls for breakfast 🙂

Yes!! They are definitely a comfort food 🙂

Bahahahaha! Cinnabon was the smell of death!? OMG, I almost fell out of my chair laughing at that one! I can’t believe you once hated cinnamon rolls! Especially considering how EPIC these look! Seriously, I NEED at least 3 dozen of these right about now. Extra glaze. 😉 Cheers, chicka!