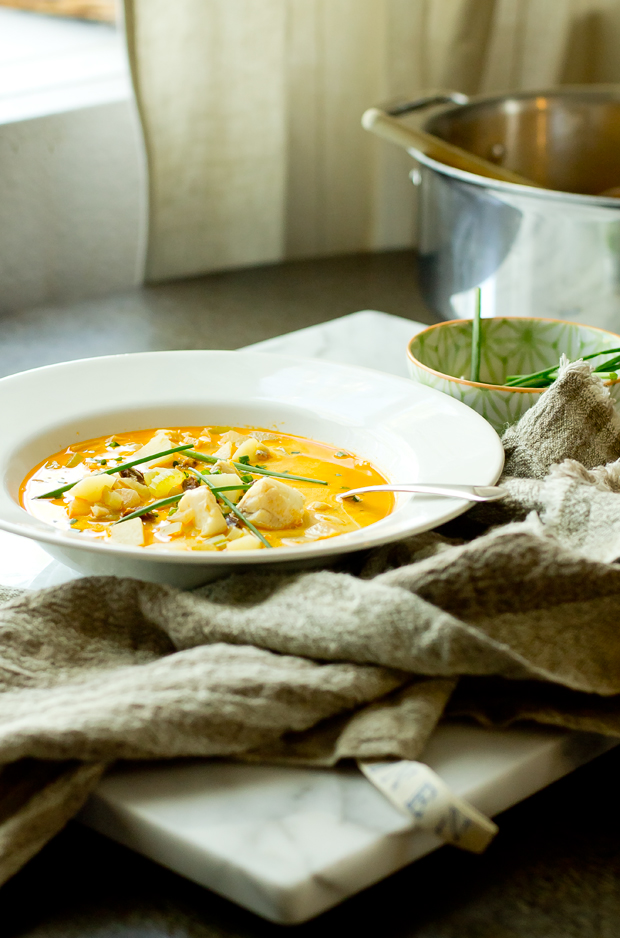 My favorite fish market in San Diego, called Catalina Offshore Products, has weekly coupons that typically include seasonal fish and whatever they happen to have a plethora of at the moment.  I was so excited when, a few weeks ago, I started noticing halibut all over their list.  I went to the store and, naturally, began chatting up the fish monger and I learned that I was quite unwittingly dropping in during the beginning of halibut season.

There’s a halibut season? I thought to myself.  Who knew? 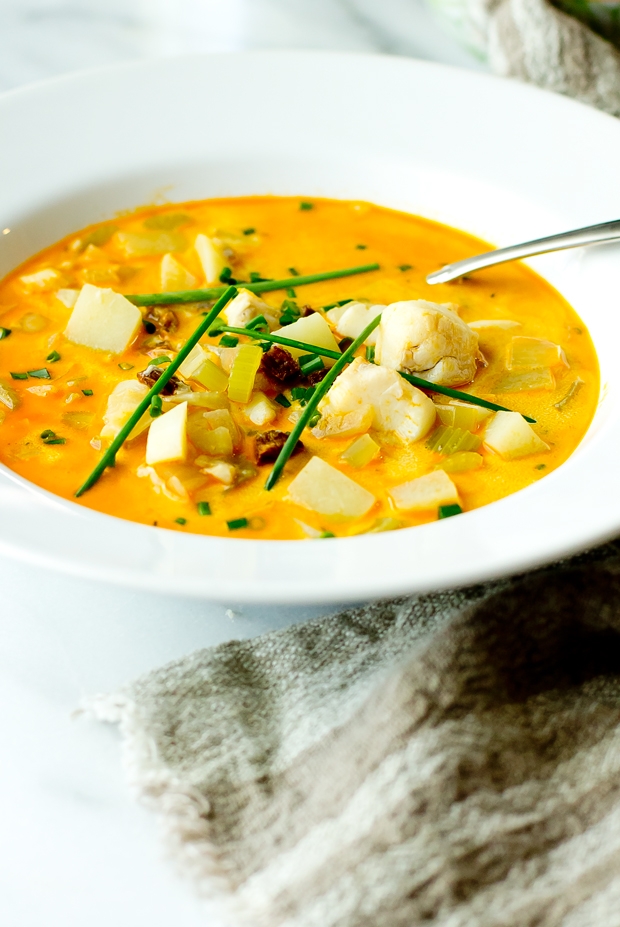 Which lead me to my next musing.. I don’t really know very much about halibut at all besides the part where it tastes freaking awesome… and I vowed to soon remedy this.

So let me share with you my new-found internet-generated halibut knowledge. First of all, halibut is actually a type of flounder.  This flat, round fish is huge and has been known to grow as large as 700lbs.  Apparently halibut are semi-cannibalistic; i.e. will eat lots of different fish with indiscriminate taste and even smaller fish of their same species will do in a pinch. 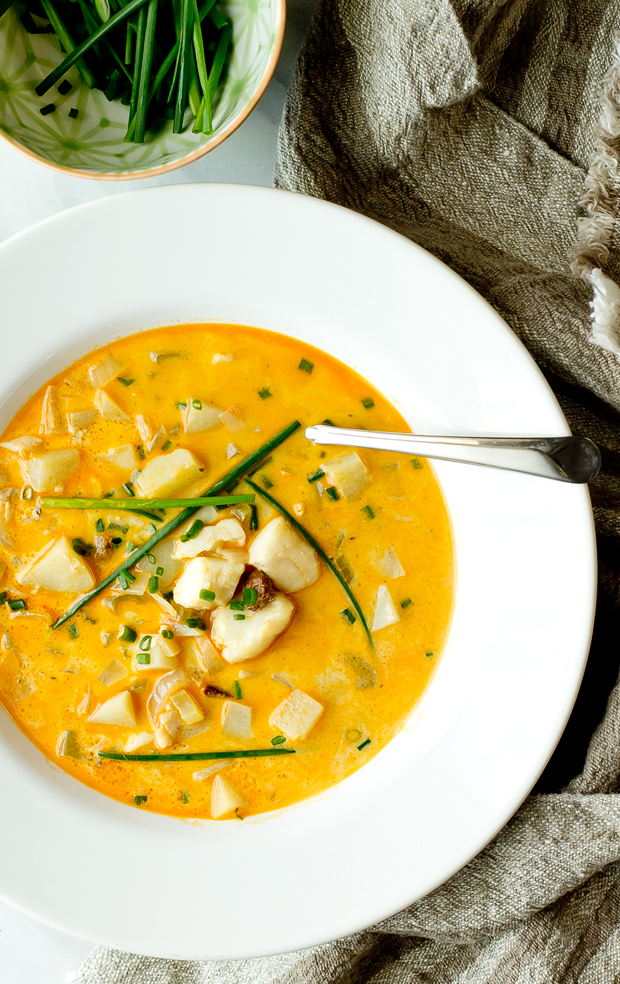 Halibut are most commonly found/fished in the North Pacific, specifically off the coast of Alaska, British Columbia,  and the Pacific Northwest of the US.  Most commercial fishing of halibut takes place off the coast of California, Oregon, and Washington.  Halibut season begins Mid-March and typically runs through November for commercial fisherman.  For recreational fishers, halibut season does not begin until May.

Although halibut season is long, it’s considered a springtime delicacy as this is the time when everyone gets excited that we can start expecting halibut at the markets again!

So, armed with my new foodie knowledge, I packed up my fresh halibut and trotted on home to make Blushing Halibut Chowder, which is appropriately named for the orange-y/pink hue of the broth that comes from the spices and seasoning seeping out of the rendered Spanish Chorizo.  (A hit of Spanish Paprika doesn’t hurt things either). 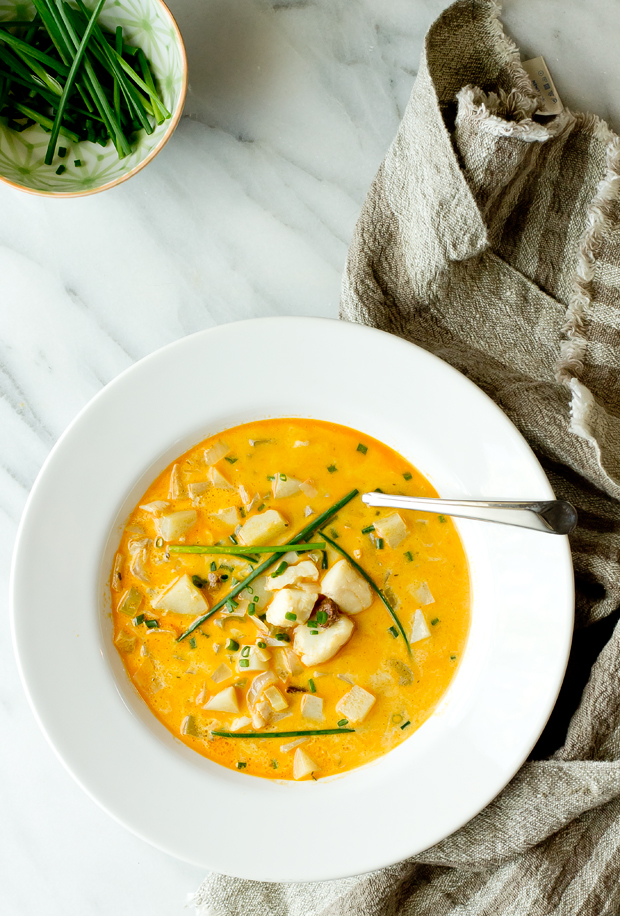 While halibut is the star of this recipe, you could certainly substitute any variety of mildly flavored fish in this recipe.  Cod immediately comes to mind.  I think I’d avoid something like salmon since I think the flavor would compete too much with the Spanish chorizo.

My one suggestion with this recipe is to make sure to poach the halibut over a low or medium-low flame.  If the poaching liquid is too hot you can risk the fish seizing up and becoming a bit rubbery.  Flaky, meaty, and tender are textures that I much prefer and this can be achieved through a gentle coaxing of heat. 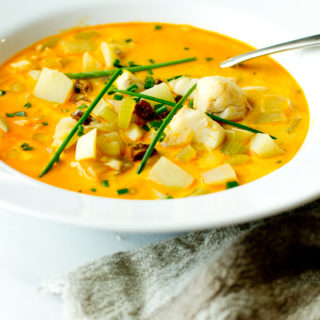 Gorgeous, and the perfect feed for the cooler weather. Adding ingredients to my market shop list now. Havent cooked halibut before, so appreciate the note on doing it correctly.

Thank you so much Anna! I just love chowders and could eat them anytime of year 😉

That’s a fantastic initiative from your fish monger and freshly caught fish is always the best to cook with. We don’t get halibut where I live but I’m sure I can adapt this recipe to work with what is available here ?

Yes this could definitely be adapted to a wide variety of fish I think! 🙂

Thx, on my menu for the coming week then. 🙂

This sounds and looks wonderful! Love the chorizo and the paprika with the lovely fish 🙂

Thanks Jennifer! I’m currently addicted to Spanish everything… hopefully I don’t overwhelm everyone with recipes full of spanish chorizo and smoked paprika lol!

mmm. . . This looks like an absolutely wonderful fish chowder.

Yes indeed it was 🙂

We LOVE halibut Sarah and we could eat chowders every day of the week at our house! Can’t wait to try this recipe! Looks so easy too! Thanks for sharing!

Yess!! Said like a true New Englander 🙂 It’s a really easy recipe and the halibut takes it over the top in my opinion.

What a gorgeous bowl of soup! Halibut is one of my favorites 🙂

Thank you so much Sonali!

Everything has a season, so it’s not surprising to me that Halibut has one.. although I never knew when it was!! So thanks for the 411 chicka! I’m with you in your halibut love – So freakin’ delish! So you know I’m loving this chowder!! I’ve never had a halibut chowder before so I can’t wait to try this! It looks seriously scrumptious and packed with so much flavor! And I LOVE LOVE LOVE your name for this dish – tres chic! Pinned! Cheers, dear!

To be honest I’ve never had halibut chowder before either… until I made it 😉 You always make me smile with your sweet comments. Thanks for all the recipe love! 🙂

I’m so in love with this recipe. I was at my local fish market two weeks ago and found out it was halibut season – I too had no idea there were ‘seasons’, but it seriously is one of the most delicate and flavorful fishes ever, isn’t it? Love that you put it with a soup recipe, totally going to have to try this and make the most of halibut season!

Yes!! Halibut is one of my absolute favorite fishes! Glad you are also a superfan 😉

Umm okay this looks too delicious to even eat but yet it sounds so phenomenal I need to! It’s like I’m torn! 🙂 Seriously, beautiful photos and the flavors in this soup sound absolutely to die for. I love a good seafood soup and this looks perfect for a rainy day like today!

I have to say, I’m not a huge fish eater (having been raised in a land locked state) but I would be ALL OVER this! lovely color and amazing flavors!

This chowder looks absolutely gorgeous and delicious! Even though the weather is getting warmer, I would still love a big bow of this soup!

Would like to try and make this too… I’ve rarely heard of halibut chowder but this looks absolutely delicious!!