Let me present the Black Forest Pavlova, the dessert I certainly didn’t know I needed this quarantine.

But oh man was it good!

(And even though eating our weight in sugar isn’t a healthy coping tool, sometimes it’s the best we can do…)

Pavlova is a meringue based cake that originated in either New Zealand or Australia somewhere around the 1920s in honor of the ballerina Anna Pavlova. The concept is likely a more approachable adaptation of a more structured Austrian torte, called Spanische Windetorte, made from fussy and complicated appearing layers of meringue and cream.

Pavlova is a bit less common here in the US, but it is a simple yet impressive dessert to throw together for a summer date night or party (whenever those are scheduled to happen again…)

And this Black Forest Pavlova version takes advantage of all the glorious summer sweet cherries just waiting to be plopped upon a dessert.

How to make the Chocolate Meringue

You can make meringue using a hand mixer or a stand mixer. I do recommend using a stand mixer for this recipe, if you have one, since it’ll be a lot more efficient.

The egg whites will be easiest to whip if they are at room temperature. And have a clean, clean bowl as any extraneous grease or oils will prevent your meringue from whipping properly. To this end, you also need to make 100% certain there is no yolk that gets into your whites. To prevent this, I recommend separating the egg whites one at a time before adding them to your mixing bowl.

Whip the whites until they are frothy before adding sugar and cream of tartar. The cream of tartar will help the meringue stabilize more easily. (You can also use vinegar as a substitution). The meringue will be ready for the chocolate when it forms stiff peaks and is beautifully glossy.

Next, the chocolate goes it. (And yes, I know this goes completely against the concept of no fat in the egg whites). Yes, the chocolate impacts the meringue. But also… it will work!

No, you’re not going to get a Black Forest Pavlova of towering architectural heights. But what you will get is a delightfully crunchy and chewy and light base of a molten brownie that just absolutely melts in your mouth and makes all your chocolate dreams come true.

Homemade whipped cream is critical for this one, in my opinion. To make your own whipped cream, you want to start with cold cream as this will help it to whip up better (unlike the eggs which should be room temperature!) And whip whip whip until it forms medium peaks, but does not break.

Wait until your meringue has fully cooled to room temperature after baking, and mound it with the fresh whipped cream and a sauce made of sweet cherries and kirsch (to get that classic Black Forest flavor), and add more fresh cherries to the top as desired!

Looking for some other summer dessert inspiration? Be sure to check out the following: 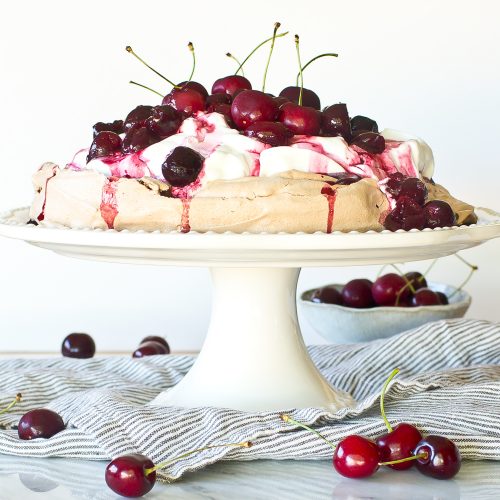 For the Cherry Sauce

For the Whipped Cream

Burger with Fig and Goat Cheese