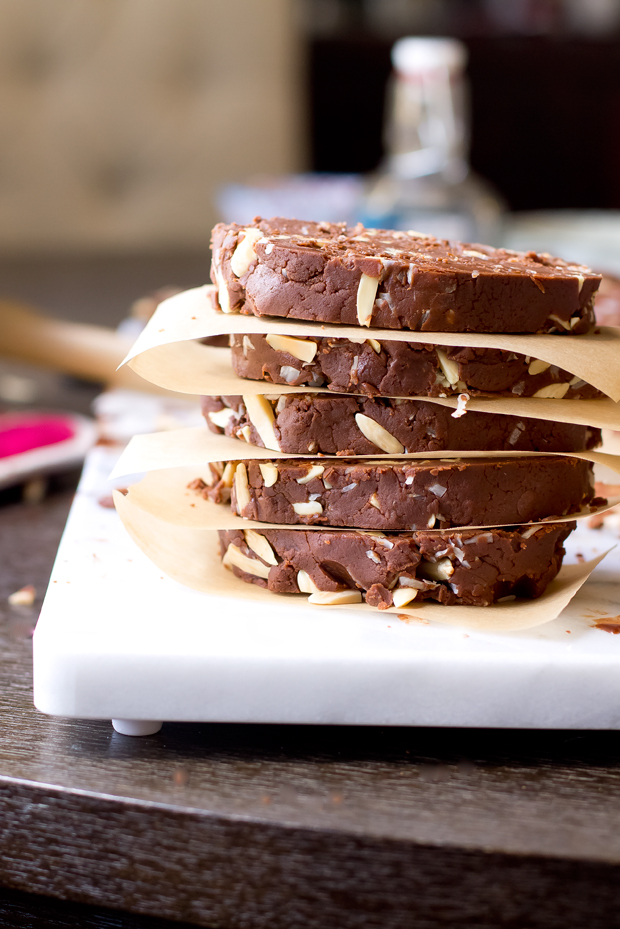 Being born and raised in Michigan there were numerous trips to Mackinac Island over my lifetime.  And anyone who knows anything about Mackinac knows about the horses, the Grand Hotel, and Mackinac Island Fudge.

Thus, in the Christmas spirit I’ve accomplished something I’ve fantasized about for years: making fudge, the old fashioned way, on a marble slab, in the comfort of my own kitchen, just like they do on Mackinac Island.

(Because what else would a Foodie Girl dream about..??)

Now I know what they do in the fudge shops is mostly for show.  I mean, you can make a rich and creamy fudge (apparently) by just stirring the fudge by hand.  I haven’t tried it.  But if you don’t own a marble slab and you want to make this recipe at home, just substitute marble slab and putty knife with a pot of chocolate and a wooden/silicone spoon + a heck of a lot of upper body strength and endurance. 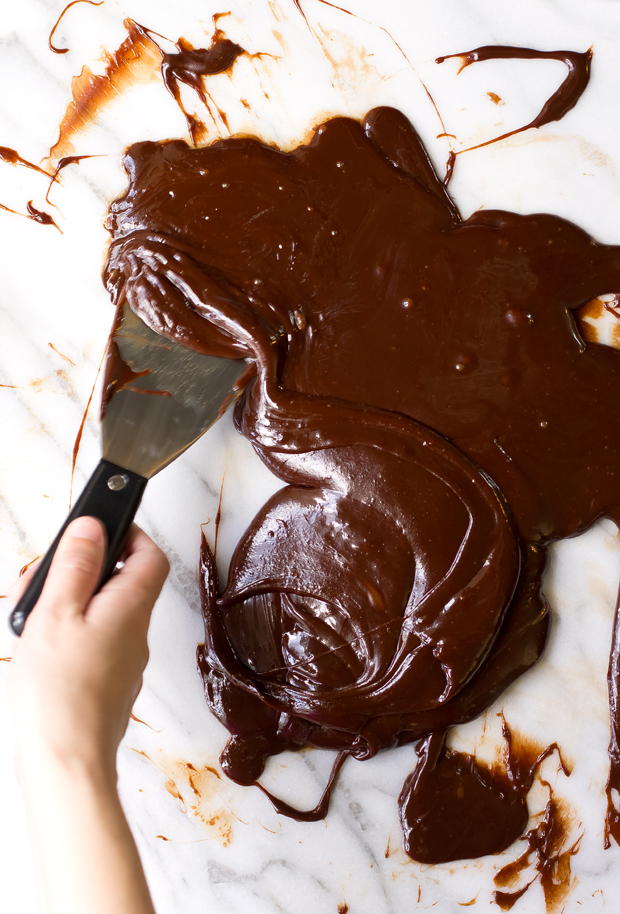 But if you’re like me, ambitious with decidedly no upper body strength to speak of, now’s the time to bust out the marble slab, put some chocolate, sugar, and cream on the stove, and prepare to get messy.

Because this Almond Joy Fudge, Mackinac Island Style is literally the next thing you’re going to want to make in your kitchen (because really, who needs dinner?)

But because most of us are a little scared of making fudge, I am going to outline my process in very detailed manner, which will hopefully provide some guidance and set you at ease.  I’d also just like to point out that I am 100% amateur and am no professional fudge wizard.  But I was successfully able to manage making fudge that was perfectly creamy and delicious following some straight forward candy-making tips (thanks Alton!) and watching YouTube fudge wizards on repeat.

(Also since I’m obsessed with brand loyalty… Joann’s Fudge on Mackinac Island was deemed to be the best fudge in Mackinac Island based on the Unofficial Gourmet Gourmand Family Taste-testing Experiment, where we may or may not have wandered the Island to do a blind taste-test of all the fudge samples.  Yes. This is the type of family I have.  And yes, there are free samples.)

That being said I’m not sure my fudge rivals Joann’s, but I am pretty proud of the results. I adapted Alton Brown’s chocolate fudge recipe to create the base for the fudge.  And then I threw some coconut and almonds in there for good measure.  (One can never get too festive, especially this time of year).

So if I’ve convinced you to start the fudging madness, let’s get you started by employing a heavy bottomed medium- saucepan. And in goes the sugar, cream, butter, unsweetened baking chocolate, salt, and corn syrup.  The corn syrup is critical, as this will help prevent over-crystallization of your sugar in the fudge (over-crystallization = grittiness).

Next you want to stir your ingredients over medium or medium-low heat until the chocolate is melted and the sugar has dissolved.  I’ve read varying reports on this, but making sure to scrape down the sides of the pan will also help prevent the excessive crystallization. 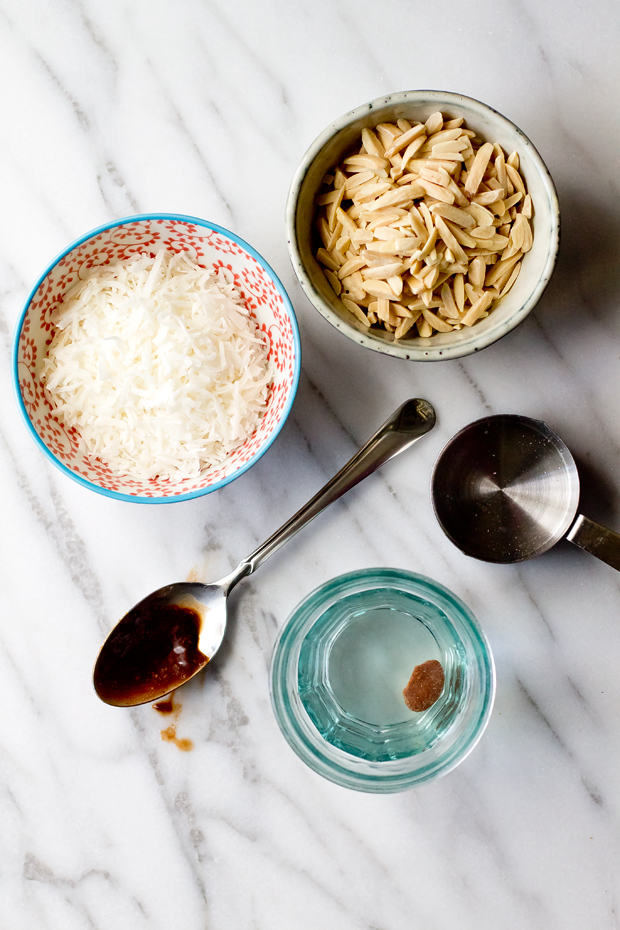 Once everything is dissolved, it is time to pop in your candy thermometer, stop stirring, and bring the mixture to a boil.  And you boil until the mixture reaches soft ball stage (about 234 degrees Fahrenheit).  I didn’t trust my thermometer to I also used the soft ball test, which means dropping a dollop of the chocolate mixture into a glass of cold water and forming it into a squishy ball with your fingers.  Undercooked and and it won’t come together, overcooked and it will become hard.  If it’s undercooked, heat a little longer and try again. If it’s overcooked, there’s nothing you can do except toss it out and start again.

SO!  Once you’ve established your fudge is at the soft ball stage, immediately remove it from the heat and drop a little more butter into it. 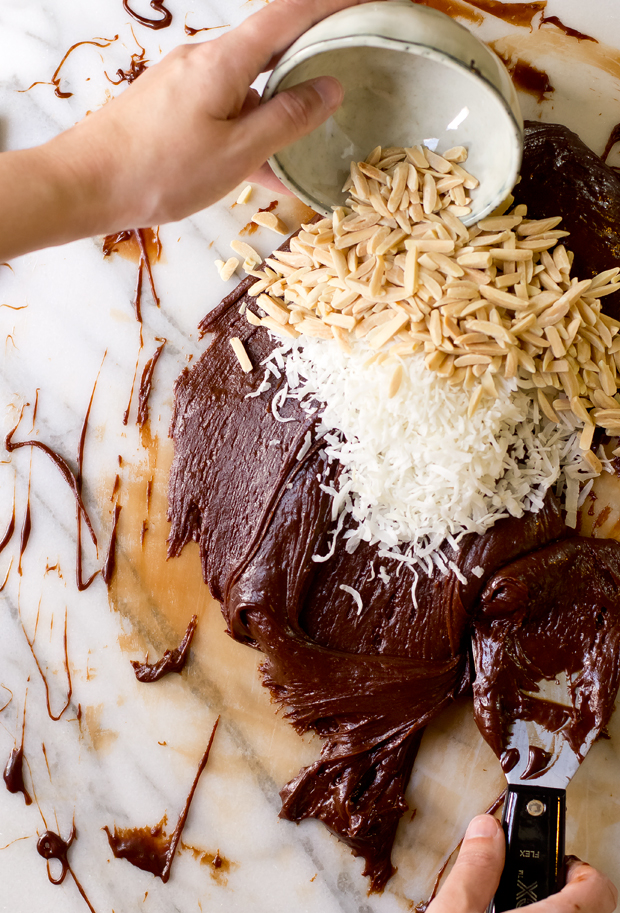 But!  There is also a problem if your mixture is under-crystallized as well.  It will basically turn into hardened and cold chocolate goo.  It will taste like the flavor of fudge but the texture would be decidedly weird.  You wouldn’t have the creamy soft texture that we all know and love about fudge!

So that’s where the putty knife comes in.  (Or your wooden spoon). 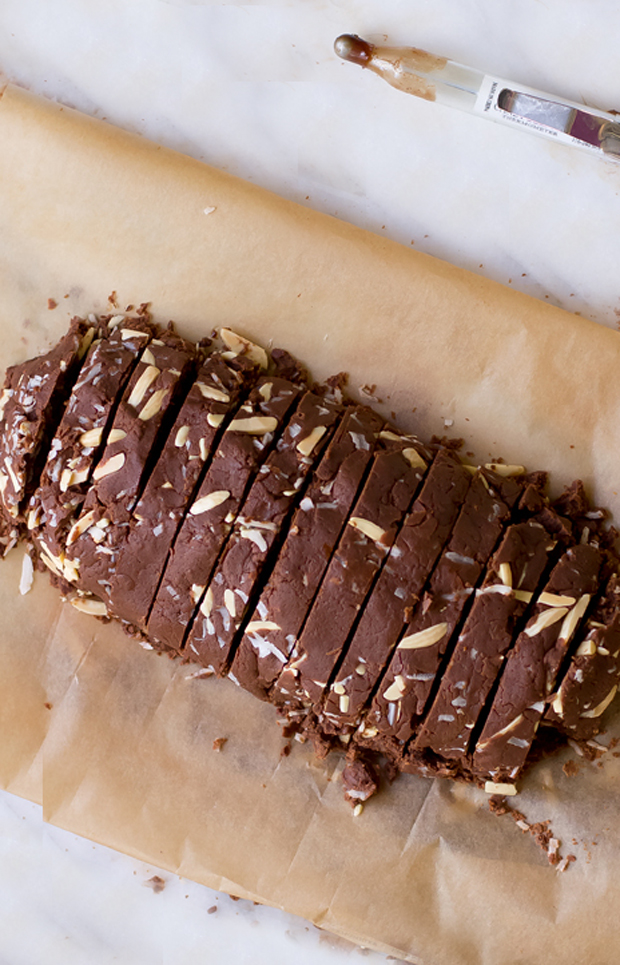 As soon as my mixture hit 150 degrees I immediately poured it out onto my marble slab and got to work.  Working quickly to ensure no fudge ran off my board and all over my table, I kneaded the fudge together, whipping it together to create sugar crystals and air bubbles.  The process of pulling and kneading the fudge eventually allowed it to set up to the point where it wasn’t trying to slide off the board anymore.  I think I added vanilla at that point and kneaded that into the mixture.  (Can we talk about the part of this experiment where I clumsily whipped chocolate slime all over my tripod, then bumped it with my arm, and my camera almost came crashing down.  Yes that happened.  But Dave caught it and was the hero of the hour.)

But as one crisis was averted another began- when to add the coconut and almonds??  Alton’s directions on this were decidedly sub-par, so I looked to my YouTube Wizards for reference.

And they suggested waiting until the fudge became just slightly matte in appearance, but was still decidedly soft. Okay, I thought, sounds good.. and when it was time, I dumped everything in. Almost immediately the fudge began to cool down rapidly and became very matte; I mixed it one final time and then shaped into a fudge-y loaf like they do on Mackinac and set it on a piece of parchment to cool. 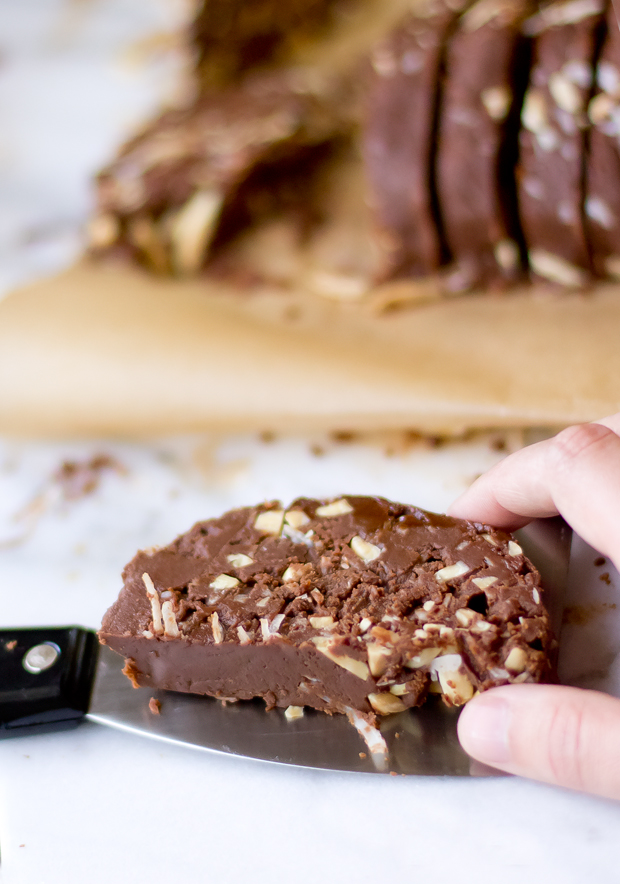 And impatiently waited again, twiddling my thumbs, contemplating cleaning off my tripod but neglecting this chore, and then eagerly diving in to slice my fudge as soon as it seemed even remotely reasonable that I could attempt such a feat without the entire brick of fudge falling to pieces.  Slicing with conviction, I managed to snag a photo before eagerly devouring the entire wedge of fudge in one sitting…

SO thank you to Alton and the Fudge Wizards of YouTube, because I could not have done this without your expert guidance.

And there ends the story of my Official Mackinac Island Style Fudge Making Experiment.  And I can only hope is the beginning of yours..

(Please let me know how it goes!) 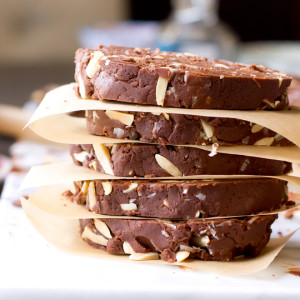 I hope you’re bringing some of that home for Christmas!

This looks amazing, Sarah! I honestly had no idea that “real” fudge was made on a granite slab… ?But now I know, and now you’ve inspired me!

Haha I don’t know about “Real” or not, but it’s how they do it at the stores on Mackinac Island. It was certainly fun!

Hey Lauren! Isn’t Northern Michigan the best? I’m from Michigan originally, but now live in California… I try to get back there at least once a summer though.

Getting together with friends for a potluck and to watch the Seahawks-Lions game. Our tradition if to bring foods reflective of the visiting teams’ home: Michigan, in this case.

I figured Mackinac Island Fudge would be Michigan-y enough but there are zillions of recipes. I liked yours best and made it last night. Turned out PERFECTLY! Yum!

Thanks Jeff!! So happy you had good results 🙂